What Happened Yesterday At ECOWAS Court On Nnamdi Kanu’s Case 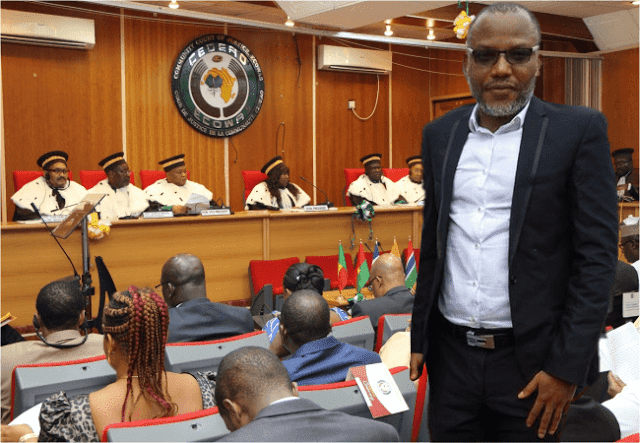 The trial of the leader of the Indigenous People of Biafra, Nnamdi Kanu, over alleged fundamental rights violation was on Tuesday stalled following the absence of the respondent’s counsel in ECOWAS Court.
Premium Times gathered that the lead counsel to the Nigerian government, Dayo Akpata, was reportedly having a meeting with Vice President Yemi Osinbajo and subsequently unable to make it to Tuesday’s court session.
A counsel representing the Attorney General at the court, Abdullahi Abubakar, asked for an adjournment on Tuesday, at the instance of the prosecution.

Mr. Ejiofor asked the court to compel the respondent to pay a cost of N2 million for what he described as a deliberate frustration of the matter.
Reacting to the submission of Mr. Ejiofor, however, Mr. Abubakar said the previous adjournment on the matter was not at the instance of the respondent but based on a request from the court.
The three-member panel, led by the judge, Hemeye Mahdmadane, consented to the submissions of Mr. Abubakar regarding the facts resulting from the last adjournment.
The court also postponed the matter till November 21, for a hearing of all the applications and determination of Mr. Ejiofor’s motion for an award of cost against the respondents.