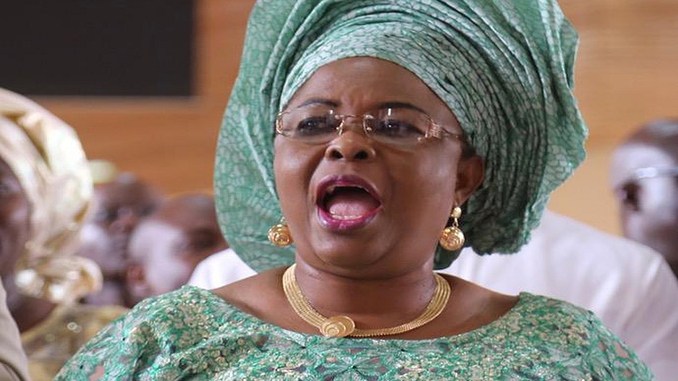 Former First Lady Patience Jonathan has revealed why EFCC is allegedly persecuting her, she is currently being investigated by the EFCC over alleged money laundering
The wife of ex-President Goodluck Jonathan said her persecution was not unconnected with 2015 general election Former Nigerian First Lady, Patience Jonathan, on Thursday, October 5, accused the Economic and Financial Crimes Commission (EFCC) of persecuting her over her ‘political views’ during the campaign for the last presidential election.
The Nation reports that Mrs. Jonathan, who was silent on what her ‘political views’ were, had during the 2015 electioneering campaign described the then presidential candidate of the All Progressives Congress (APC), Muhammadu Buhari, in uncomplimentary terms.
The former first lady also accused the EFCC of waging ‘psychological war’ against her by persistently intimidating, harassing and threatening her and those around her.
She gave instances of such harassment and intimidation to include alleged invasion of her properties and the freezing of her accounts, those of her siblings, relative and late mother
Mama Sisi Charity Oba. The ex-first Lady made these allegations in a fundamental rights enforcement suit filed before the Federal High Court in Abuja. In the suit marked:
FHC/ABJ/CS/586/2017, with EFCC as respondent, Mrs. Jonathan accused the anti-graft agency of violating her rights. In a supporting affidavit to the suit deposed to by one of her lawyers, Sammie Somiari, she identified some of her frozen accounts to include the five she opened with Skye Bank upon the advice by former Acting Chairman of the EFCC, Ibrahim Lamorde.

On why the accounts were opened, Mrs. Jonathan said because of the challenges of moving huge cash for her foreign treatment, and the need to avoid contravening any law, she approached Lamorde, who advised her to obtain credit cards from her banks. Mrs. Jonathan accused the EFCC of demonstrating ‘pathological dislike’ towards her despite the fact that she was never a public office holder.
She added: “The investigation into the operations of her pet project, when she was First Lady, is an unprecedented act of animosity against her as none of her projects was funded by the government at any level. “The respondent had physically raided the homes of the applicant and her relatives both in Abuja and Yenegoa.
“Recently, the respondent raided the home of the applicant’s first daughter, both at Port-Harcourt and Abuja. “The respondent has waged a psychological war on the applicant by its threats of arrest of the applicant and her relations, such as Mrs. Ester Oba, Tamunotonye Oba and her elder brother, Mr. Aseminaso Nyengierefaka.”
Follow Us on Twitter!