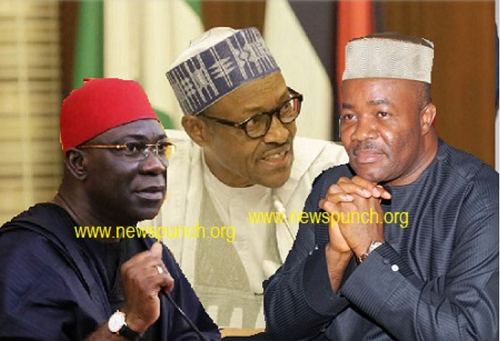 The ruling All Progressives Congress (APC) appears set for the 2019 general election, even when the timetable released by the Independent National Electoral Commission (INEC) is more than 400 days away.
Investigations by Sunday Tribune indicated that the party, working through some top security chiefs, has put in place a ‘Tact Team,’ which had as one of its assignments fostering of alliances that will lead to the defection of at least four governors of the South-South and three from the South-East to the APC.
Informed sources said that a three-pronged agenda has been unveiled by some operatives who claimed to be working at the instance of the powers-that-be in the party.

A security chief, who was said to be pivotal to the arrangement, was said to have already brokered a deal that would ensure that the PDP governors in the South-South fall for a kind of alliance that was put in place by former President Olusegun Obasanjo, in the 2003 general election,which led to the eventual demise of the Alliance for Democracy (AD) in five of the six South-West states.
In 2003, Obasanjo had entered into alliance with the pan-Yoruba organisation, Afenifere, in a deal that ensured his adoption for re-election by the AD, while the South-West governors were to retain their seats.
But the PDP used the opportunity of the dropping of guards by the AD governors to take the zone, leaving the then Governor Bola Tinubu, of Lagos State as the sole survivor of the tsunami.
It was gathered that a security conference, held in Uyo in October,which was put together by a security consultant in Akwa-Ibom State, provided the avenue for key stakeholders in the unfolding ‘scrub-my-back, I-scrub-yours’ agenda to deepen discussions, which sources said has now been carried to the highest level.
It was gathered that the conference provided a meeting point for Governors Udom Emannuel of Akwa-Ibom State and Nyesom Wike of Rivers State and the Inspector General of Police, Ibrahim Idris, who have resolved to maintain cordiality ever since.

“Even though the Rivers State governor has been seen as unleashing verbal onslaughts on the Police in recent times, those in the know believe that the enmity between the state and the security system has subsided, especially going by the pictures of the body language of the IGP captured during the security summit which showed the IGP hugging and saluting the governor,” a source said.
It was further gathered that the recent meeting between President Muhammadu Buhari, and the Senate Minority Leader, Senator Godswill Akpabio, might not be unconnected with the developments, ahead of the 2019 elections.
Though sources around the Senate minority leader stated that Akpabio’s visit to the Villa had to do with the president’s bid to ensure smooth passage of the 2018 budget, it was gathered that more issues other than the budget came up for discussion.
Accordingly, sources said that the three-pronged approach is already in the offing.
The first is the push to secure a gentleman’s agreement with governors of the South-South and South-East.
The second is the plot to work with some of the PDP stakeholders to install a “weak” national chairman, while the third approach is the bid to ensure the defection of many PDP governors to the APC from the South -South and South-East with a guarantee that the defecting governors and their godfathers would be shielded from investigation by the anti-graft agencies.
Although sources claimed that the project was working as planned so far, another source in the know said that the APC needed to be warned that one of the prime movers of the agenda could end up betraying the party the way he allegedly betrayed a former top official of the previous government who was said to have facilitated his transfer to a key North-West state ahead of the 2015 elections.
This source stated that the essence of the transfer was to ensure the said official ensured the former ruling party secured 25 per cent of votes in the 2015 presidential polls, but was not sure whether he chose to remain neutral or work with the opposition.
“The high-wire politics going on could see the defection of some PDP governors to the APC soon. The targeted governors and states include Rivers, Akwa-Ibom, Cross Rivers and Bayelsa in the South-South as well as Ebonyi, Abia and Enugu in the South-East.
“In the case they don’t defect, the Plan B will unfold to the effect that an accord will play out where the 2003 Obasanjo strategy would come unto play. Whether the APC can go to sleep on these strategies is, however, another issue entirely,” the source said
Follow Us on Twitter!