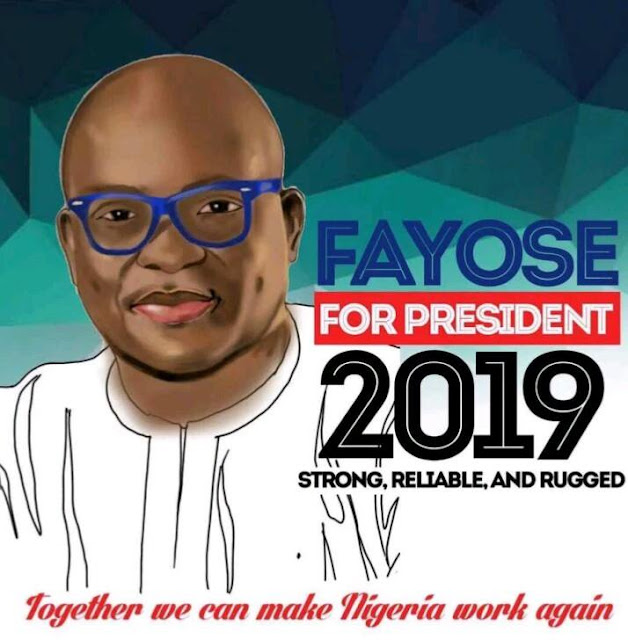 As 2019 Presidential race gathering momentum, the Christian Association of Nigeria, CAN may have endorsed the Ekiti State Governor, Ayodele Fayose.
The Christians' organisation a letter sent to the governor by the Christian body and signed by the national general secretary, rev. Musa Asake, according to AITonline commended the courage and the boldness with which Fayose, openly declared his intention to contest the 2019 presidential election.
The body also advised the governor not to be distracted by people who have nothing good to offer the country.

In the letter dated October 16, 2017 with reference number can/gs/igmails/02/017, C.A.N. noted that Fayose's presidential declaration of September 28, 2017 in Abuja, could only be done by somebody with uncommon boldness and courage giving the harassment and intimidation that would surely follow.
"unarguably, you have done what many of our politicians, Christians in particular, do not have the courage to do. This is why I agree with you, hook, line and sinker, when in your speech you said inter alia, "you are all witnesses to my commitment to this party in this difficult period, where I have demonstrated uncommon courage that makes me stand out as capable of leading our country at this time."

"Your excellency sir, because you are known to doing great in your leadership and that you will move this country forward, the enemies of progress are not happy with your declaration and are not sleeping well. The devil will use many, even those who might be closer to you to try to create lies, false accusation, spread rumours, just to distract people from seeing the good leadership qualities that are in you.
" in times like this, if honest and courageous leaders like you are not careful, this can bring discouragement. Be assured that the lord who has led you in your leadership as the executive governor of Ekiti State at this time, will never let you down. Your critics have the right to say whatever they want, that is to be expected anyway. No leader should expect applause from his critics," the association said.
C.A.N. added; "the leader that Nigeria really needs is the one that shuns the cosmetic approach because he knows it is superficial and the " quick fix it" approach because he knows it is temporary. The country needs a leader who has the courage to face problems honestly, the wisdom to understand them, the strength to do something about them and the faith to trust god to do the rest."
C.A.N. said the nation's problems could only be solved by leaders who walk with God and that Fayose had always put his trust in God.
It opined that the assignment of rebuilding the country would not be impossible for Fayose as a leader because god's grace would be sufficient for him.
Follow Us on Twitter!