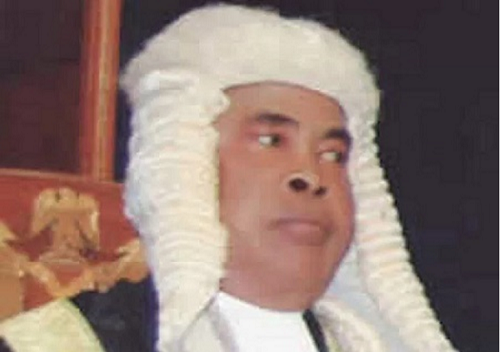 An operative of the Department of State Service (DSS), Mr. Aminu Ndakpoto, on Friday narrated how Supreme Court Justice, Sylvester Ngwuta, during interrogation said that he sold palm oil and rice to make money.
The DSS operative gave this account when he testified before the Federal High Court in Abuja in Ngwuta’s ongoing corruption charges.
Ndakpoto, who narrated how bags of foreign and local currencies were discovered in the defendant’s residence, said Ngwuta claimed that the funds found stashed inside bags, were proceeds of his palm oil and rice businesses.

Another business he told the court to have been involved in was foreign exchange where he bought and sold currencies with “mallams”.
He said that Ngwuta had told investigators that grilled him that he used to buy dollars when the rates are low and sold at a higher rate and that the proceeds of the business was also part of the foreign currencies discovered in his home.
The Supreme Court justice was said to have told his interrogators that since he hardly fell sick he had channeled the accumulation of his annual medical allowances paid to him in foreign currency by the Supreme Court into his business.
According Ndakpoto, Ngwuta said he usually purchased the palm oil and rice from the open market and subsequently sold them at a favourable price.
The witness said that the defendant when asked to name his partners, customers and where his warehouse was located, had explained that he did not transact with a particular customer and that he had neither partner nor a warehouse.
Ndakpoto, who was led in evidence by the prosecution counsel, Mrs. Olufemi Fatunde, said that he was on the team that interrogated Justice Ngwuta on October 9, 2016. He simply gave the name of his colleague on the team as Mike.
Among other things the witnessed said about Ngwuta, he added that everything the defendant told the DSS in the course of his interrogation were all recorded and could be played at anytime to authenticate his testimony.
“When I asked him which bank account he operates, he said he only banks with union bank. On that day, there was no written statement by the defendant that I witnessed, that was on Sunday, October 9, 2016.
“Before he came to our office, there was news everywhere about the arrest of judges and that the defendant travelled to the UAE with some others to collect bribe to influence the case he was handling.

“When he came back the second day, I went to meet him at the waiting area. When we were coming down to my office, the defendant asked that we did not ask him about the money they said they found in his house.
“My colleague, Mike reminded him that he had explained the previous day that the money were from his accumulated allowance, trades in foreign exchange and farm produce,” he said.
According to Ndakpoto, at that point, the defendant said he was feeling feverish the day his home was raided and could not follow the operatives that searched and allegedly found the bags of cash.
“He also said that he does not know how they came about the money. We asked him who owns the bags that contain the money, he said the bags were his own but the money inside were not his own,” said.
The witness further revealed that on the third day, October 11, following a request by his team, Justice Ngwuta brought multiple passports, including diplomatic and standard Nigerian international passports.
He said when they asked the judge if he had ever visited the UAE, he denied ever travelling there.
The witness said, “We then told him that there was prove from entries in his passports that he travelled to UAE. It was at that point that he said he needed his lawyer to be present before he could say anything else. We put it to him that he presented the passport he claimed was lost to the UAE Immigration Authority, but while leaving Nigeria, he presented a different passport.
“In the passport, his entry into UAE was stamped on October 9, 2015, and his exit was also stamped the same day. But that said passport was the same the defendant said he lost. The passport was not cancelled.
“We went further and showed him the recent passport he collected after he declared the old one lost (Exhibit 13c, which was issued to the defendant on September 17, 2014), On that new one, it showed that the defendant entered Seychelles on the 4th of October 2015 and his exit was on the 8th”.
The trial judge, John Tsoho adjourned further hearing in the matter till January 10.
Justice Ngwuta is being prosecuted on a 13-count charge bothering on money laundering, age falsification, as well as his alleged possession of multiple international passports.
He was docked before the high court on November 21, 2016, and later granted bail to the tune of N100million.
Follow Us on Twitter!