Home » opinion » BOMBSHELL: I ought to have died - Prof. Wole Soyinka

BOMBSHELL: I ought to have died - Prof. Wole Soyinka 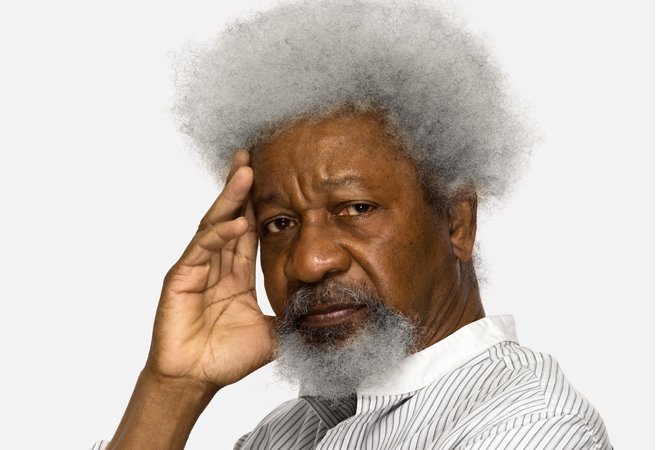 Professor Wole Soyinka, the Nobel Laureate said he ought to have died going by his lifestyle.
It was the shocking response by the 83-year-old professor of literature and political activist to a question by the Financial Times of London, on how long he intends  to live.
“By all logic, I should not be alive right now because of my lifestyle,” he replied.
“I flout everything they teach at the medical school, including the fact that I don’t drink water. I eat only when I want to. I don’t obey the rules of cholesterol,” he added during the conversation with David Pilling,  the FT Africa editor, at the Pescatori restaurant in west London.
Soyinka gulped in between his meal,  a bottle of Arneis Langhe wine valued at £45 and two glasses of another wine  Montepulciano valued at £27.80.
Even though Soyinka indulges himself with wine, he is by his own admission a non-smoker, an indulgence that could have created a possible health problem for him.
He said he used to smoke hard cigarettes such as  Gitanes, Gauloises, cigars, and cheroots, but he had quit smoking.
” I lost interest several years ago,” he said, also revealing an argument he once had with the late Cuban leader Fidel Castro on the perils of smoking.
“I had an argument with Fidel Castro about it.  By that time Castro had got religion about the perils of smoking and he rounded on a guerrillero, saying, ‘This is bad for you. I have medical evidence.’ He started bullying him. I said, ‘Wait a minute. Leave the man alone. Let him find his own time.’ ” Soyinka says this triggered a two-hour discussion.
“Castro loved to argue. But I think that day he met his match.” The two called it an evening and Soyinka retired to bed. “The following morning a box of cigars — Cohiba — arrived at my hotel. It just said, ‘With compliments of the Cuban government.’ Who did it? To this day, I’ve no idea. But I still have some of them in Abeokuta. That’s the story of my smoking career.”

The conversation dwelled on Soyinka’s life from childhood in Abeokuta, with the famous writer revealing also his life with Fela Anikulapo Kuti, his equally famous cousin. while both of them shared an apartment in London’s Bayswater, in the late 50s.
“We were impecunious. We shared everything,” he said.  “Everything. I won’t say more than that. It was a wild apartment.”
After graduating from Leeds University, the already prolific Soyinka wrote plays including The Lion and the Jewel, which attracted the attention of London’s Royal Court Theatre.
His first work to appear there was a one-act play about apartheid South Africa called The Invention. It was preceded by a poetry recital to which Soyinka invited his cousin, a young musician called Fela Kuti, to accompany him on stage. That was a big break for Fela, who went on to become the legendary father of Afrobeat, the FT reported. (NAN)
Follow Us on Twitter!