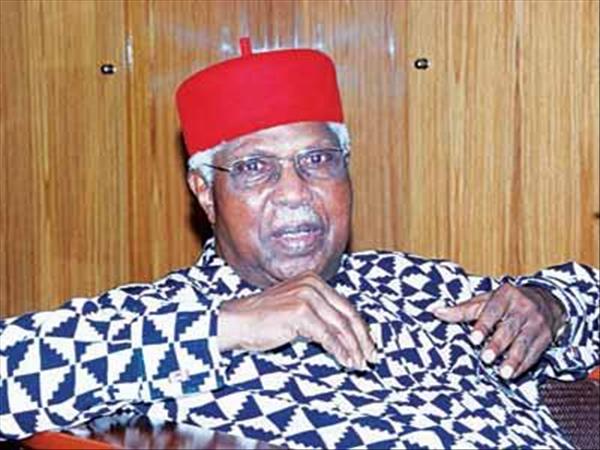 It was learned that Ekwueme’s younger brother and surgeon, Professor Obumneme Ekwueme, who would have travelled with his brother to London as head of his medical team was dropped from the Air Ambulance because he had problems with foreign exchange that would take care of other exigencies that would arise such as feeding, accommodation, drugs and laboratory tests among others.
Obumneme would now depart for London today, November 13, to join his brother and ensure adequate treatment for him.
The family source wondered why the Federal Government would promise to treat Ekwueme as a former vice president and later renege on such promise.
“We are not surprised about the development because Ekwueme has not been receiving his entitlements from this administration. The Federal Government was not pressurised to make the promise. It did so on its own volition.

“ It is not as if our family could not have treated him in the best hospital in any part of the world. Even if they are not treating him, let them pay him his entitlements when he is still alive. They should not wait until he dies so that they will come and pay tributes to him as the best man while alive,” the family sources said angrily.

Ekwueme was brought to the Akanu Ibiam International Airport, Enugu with a National Orthopedic Hospital Enugu, SUV ambulance at about 7: 26 am and driven straight into the tarmac, where he was taken into a waiting air ambulance with registration number N605 JA. The white Air Ambulance was said to have arrived the airport late Saturday evening and spent the night at the airport.
He was transferred into the aircraft in the presence of his family members who escorted him to the airport. The aircraft took off from the tarmac at about 8: 37am with the family members waving to wish him a safe trip.
Among the family members present, was Ekwueme’s daughter Mrs. Onyemelukwe, who is a running mate to the Peoples Democratic Party, PDP, governorship candidate for Saturday’s gubernatorial election in Anambra State.
The family members had earlier declined comments on the former vice president’s illness, saying that they were not in the mood to speak to the press and did not need any media coverage.
Vanguard journalist manhandled
Meantime, Vanguard’s State Correspondent in Enugu, Mr Dennis Agbo, who witnessed Dr Ekwueme’s airlift was attacked by soldiers, policemen and other airport security officials before they forcefully confiscated his camera, mobile phone and other working tools. Some of the securitymen who were attached to Ekwueme as well as his family members forcefully deleted all the pictures of the Air Ambulance from his camera and mobile phone which they seized, threatening to visit him personally, if the story of the incident was published.
Agbo was briefly detained at one of the offices in the airport, where his mobile phone and empty camera were later returned to him.
Vanguard
Follow Us on Twitter!