Home » news » Buhari: My Visit To S’East, Strong Expression of My Belief In One Nig, Agitators Need a Rethink

Buhari: My Visit To S’East, Strong Expression of My Belief In One Nig, Agitators Need a Rethink 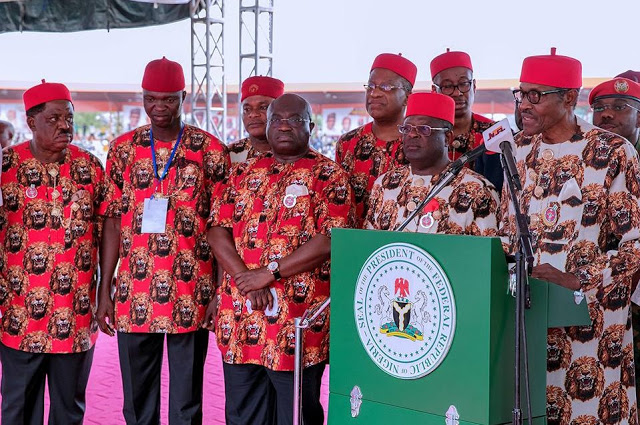 In his visit to the South-east since assumption of office, President Muhammadu Buhari Tuesday arrived Ebonyi State where he remarked that the visit was a strong expression of his belief in Nigeria’s unity.
The president also pledged to improve agriculture, power supply and the provision of infrastructure projects in the region when the 2018 budget is passed.
Buhari, whose visit to Ebonyi had been tagged the first presidential visit to the state in the last 17 years, was conveyed by a Nigerian Air Force helicopter with registration number NAF-540 from Akanu Ibiam International Airport, Enugu, to the army barracks in Nkwagu in Abakaliki, the Ebonyi State capital, at about 11.15 a.m.
He was accompanied by the state Governor, Chief David Umahi.
Umahi was among other South-east governors who had received him at the Enugu airport.
The president, who was received at the army barracks by dignitaries from the state, subsequently commissioned six projects and thereafter proceeded to the Government House where he met notable leaders of the state and traditional rulers from both Ebonyi and the South-east who conferred on him two traditional chieftaincy titles.
The president recalled how some Igbo leaders had visited him at the State House, Abuja, last month to express concern over the poor state of infrastructure in the region, assuring them that resources meant to address their concerns had been captured in the 2018 budget currently before the National Assembly.
The president promised to concentrate on power and agriculture projects as well as other social services in the region when the budget is operational and praised the state governor for the projects being executed by his administration in the state, describing them as laudable.
The president, who was conferred with the chieftaincy titles, Enyioma 1 of Ebonyi, meaning a trustworthy friend of Ebonyi, and Ochioha Ndigbo, meaning the leader of Igbo people, by both the Ebonyi State Council of Traditional Rulers and South-east Council of Traditional Rulers respectively, expressed appreciation for the titles as well as the warm reception accorded him, saying he was glad for the opportunity to interact with people of the state.
He said: “I am delighted to be here in Abakaliki to interact with the good people of Ebonyi State and indeed the South-east region as a whole. I want to express my gratitude to the people of Ebonyi State for their hospitality and warm reception since I arrived the state.
“My presence here today is a demonstration of my strong belief in the unity of Nigeria. As the most populous country in Africa with over 300 ethnic groups, our diversity is almost unique.
“When I met with the leaders of the South-east in Abuja last month, they raised several issues of concern including the state of the roads and infrastructure in the region.
“I will like to commend Governor David Umahi for his vision and commitment to the development of this state. Some of the projects I commissioned since my arrival are laudable.
“I am also grateful to the traditional rulers of Ebonyi State for the honour bestowed on me with the traditional title of Enyioma I of Ebonyi. I thank you for this honour and warm reception.
“I want to assure you that we will deliver on our promises. Our 2018 budget included many projects for the region in the area of power, agriculture and social services.”
The president was emphatic that the Ndigbo is synonymous with Nigeria just as Nigeria is synonymous with Ndigbo.
The president, who celebrated what he described as the ingenuity of the people of South-east and their talent for trade and commerce, said the Igbo ethnic group and Nigeria were inseparable.

“The people of the South-east are known for their ingenuity, industrial and commercial talent. There is no part of Nigeria where you will not find Igbo entrepreneurs, both men and women, contributing to the development of their adopted communities.
“So, I am asking you all not to buy into the senseless propaganda for secession. Igbo is Nigeria and Nigeria is Igbo. Both are inseparable.
“We must therefore continue to commit ourselves to the development of Nigeria, a Nigeria where we sustain our national unity without compromising on our cultural identities, a Nigeria where the aspirations of its people are guaranteed without prejudice to tribe or religion, a Nigeria where we can sleep at night knowing that tomorrow will be better than today.