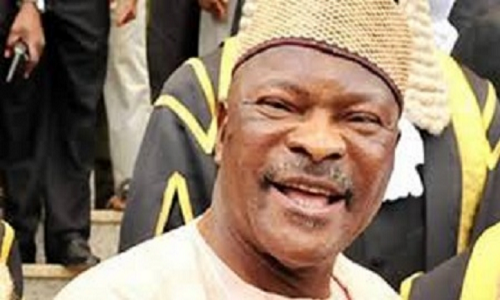 ...Says those behind such falsehood are jittery ahead of 2019 election
Former governor of kogi state,Alhaji Ibrahim Idris has described as false and unfounded allegations linking him to a 4.5 billion naira deal from former governor Idris Wada,as settlement for installing him as kogi governor in 2012
A statement signed by Usman Okai Austin said it is glaring that those behind such  falsehood are those who are afraid of the just successful ward and local government congreses election conducted by the PDP and are threatened by the ongoing reconciliation within the Party.
The recent decamping of some notable personality from the APC back to the PDP,along with some  people  at the corridor of power peddling such rumours and publication are the groups of people who have lost political value‎ and grip of power,hence a drowning mortals.Okai reeled
Alhaji Idris further described ‎the trending publication whose source is from no any other place rather than some elements who are working seriously to create misunderstanding in the  PDP family in Kogi state.
The statement described the allegation as blatant lies,black and white tissues of concocted fabrication, face saving statement as well as figment of imagination  to those peddling such dangerous utterances
The former governor stated that he is not unaware of series of attempt by some group of individuals  who has failed politically in kogi to malign and blackmail his image built over the years,saying it is one of the dirty political arrangement taking too far ‎build up to the next election in the state
'it is an attempt by some groups of compromised people and mischief makers who are bent on causing disaffection between the two igala leaders ‎to their political advantage towards returning to power that is been misused'
Idris reminded kogians particularly the eastern flank that relentless efforts are been deployed towards other prominent sons and daughters of the area to create an unresolved disaffection through inducements and what have you to sustain the current satanic trend  ‎and denials of people's rights,saying it will get to a time names of dissidents igalas who are accomplices of the current kogi leaders will be mention
Former governor Idris said the source of the information is one of the official outlet of the state government,showing clearly that the current administration of Alhaji Yahaya Bello is all out to damage and divide the rank and file of the former leaders ‎from kogi east /igala race
Kogi Government rather than concentrate on governance and robust leadership roles,has resolved and resorted to playing pranks and name calling,while the people of the state particularly the working class at all levels are saddled with biting economic hardship continues unabated, for deliberately denying them of their salaries and basic entitlements

According to Ibrahim Idris, no amount of gimmicks,design,efforts and attempts to inflict divide and rule towards the people of kogi east will stand the taste of time,as majority of the people are resolutely determined to participate in the next election frontally
Former governor Idris said that at no time‎ or fora such unholy agreement to tinker with the commonwealth of kogi people was brokered,saying it is mere efforts by those politicians who had lost relevance of power rather than consolidating same that are faning the embers of discord and unfounded allegations
Ibrahim Idris agreed to have made efforts towards electing his successor,but at no time did he consummate bilateral,multi lateral or tripartite arrangement ‎to tinker with the public funds meant to provide social services,saying it is another desperate efforts to impose themselves on the people to perpetrate their evil acts
Ordinarily,former governor Idris would have discountenanced such a cruel,malicious  and cooked allegations ‎with no impact,but it behoves on him to do so,so that the failures of the present leaders involved may not be attributed to such satanic expressions
He urged the current  leaders ‎to strife to make positive  impact on their people rather than dissipating energy on flimsy issues, urging the current leaders to go back to the drawing board,saying feasting on the current unsellable rumour will do no good,rather than to strife at meeting the social contract between them and the people of kogi instead of embarking  on an empty rumour to discredit a hard earned reputation
Idris said his 9years reign was devoid of translucent activities with priorities mainly on the welfare of workers,provision of infrastructural facilities and rejiged vital economic activities as well as enabling environment for would be investors
The former governor urged the general public to disregard such unfounded allegation , and advised them to hold emanators of such insinuations were the records exists accountable ,so as to make themselves available in the court of public opinion to account for their stewardship and put the record straight when the time comes
Follow Us on Twitter!