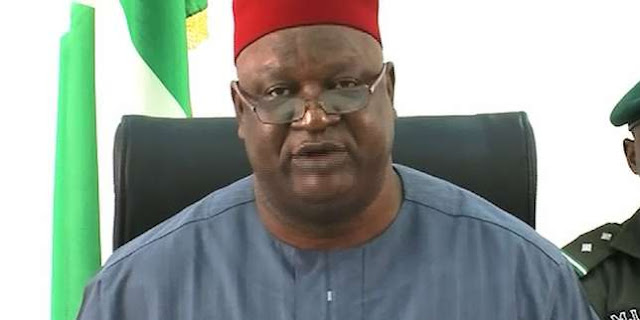 Former Secretary to the Government of the Federation, Senator Ayim Pius Ayim, is alleged to be detained by the Economic Financial and Crime Commission (EFCC) under inhuman and degrading conditions.
EFCC arrested the former Senate President penultimate Thursday.
In a petition, Anyim’s lawyer, Chief Mike Ozekhome SAN, pointed out what he describes as misleading, reports published in various online and newsprint media that the former government scribe has been released by the EFFC on administrative bail since Wednesday.
“ This is a lie from the pit of hell. These false reports, which credit their source to “unnamed sources within the EFCC”, have continued to circulate throughout Thursday and Friday, with the intent to deceive the world and divert its attention from the gross abuse of the fundamental rights of Anyim, who has been kept under inhuman and degrading conditions for this unconstitutionally lengthy period”, Ozekhome said.

The lawyer said Anyim was still held in EFCC custody till now, in spite of fulfilling all administrative bail conditions laid out for him, including deposit of his international passport and being compelled and undue influence to sign all manner of self-incriminating and property-stripping documents against his will.
“In spite of these and the clear provisions of sections 35 and 36 of the Nigerian Constitution and the Administration of Criminal Justice Act (ACJA), the EFCC has bluntly refused to release Anyim to go and attend to his very poor health over which he was receiving treatment before he was forcibly taken away from home.
“This is calling upon the Attorney General and Minister of Justice to prevail on the EFCC (and all law enforcement agencies), to respect the rule of law and the constitution they have sworn to protect and defend  by promptly ordering Anyim’s release forthwith, since no charges have been preferred against him and since he has fulfilled all administrative bail conditions”, Ozekhome said.
Follow Us on Twitter!