God made no mistake creating us Muslims, Christians to live together in Nigeria - Chief of Air Staff, Air Marshal Sadique Baba Abubakar 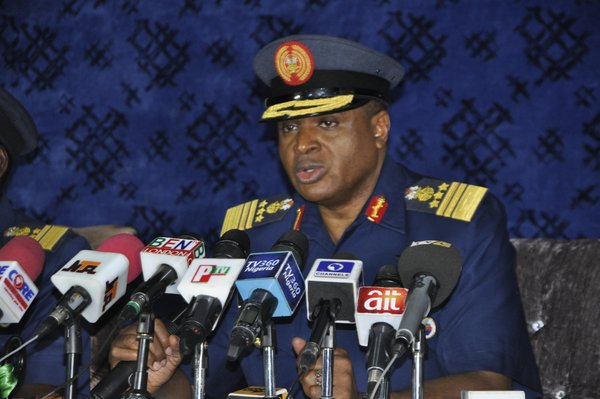 God made no mistake making Muslims and Christians live together in Nigeria, the Chief of Air Staff, Air Marshal Sadique Abubakar has said.
He stated this on Sunday while speaking at the 2017 Annual Harvest and Thanksgiving service of the Nigerian Air Force Protestant Church in Abuja, and urged Nigerians to keep the hope alive, in spite of the challenging economic situation in the country.
Abubakar was represented by Air Commodore Nelson Calmday at the event with the theme: “The mountain Top harvest of sacrifice”
He said that Nigerians should never give up because better days are ahead and that the people would smile again very soon.
According to him, the Nigeria Air Force was not left out of the impact of the economic situation in the country.

“We have also suffered because unlike in previous years we could not carry out most of our planned activities due to lack of funds.
“We had to put off trainings and other activities because there were no available resources to carry them through”.

He said despite the economic situation, that the Chief of Air Staff had ensured that 75 percent of Air Force Staff school students fees were paid.
According to him, it was a pity that about 27 states could not pay workers’ salaries, but for Nigerians, there was need to keep faith and hope alive.
The Guest Preacher, Rev Gideon Para-Mallam called on political and religious leaders in the country to live a life of sacrifice and help bring about the desired change in the nation.
He said that a lot has gone wrong because past leaders were not sacrificing.
“Political and religious leaders should live right with the fear of God and be able to make sacrifices for the good of the country.
“God never made mistake by creating us Muslims and Christians to live together”, he said.
He said that God would preserve this nation, because Nigeria is in His dream, saying that Nigerians should continue to pray.

“Our leaders can behave themselves and get things right, have the vision that is a reality”, and the crisis of leadership in Nigeria stems from the temptation to remain in power.
Follow Us on Twitter!