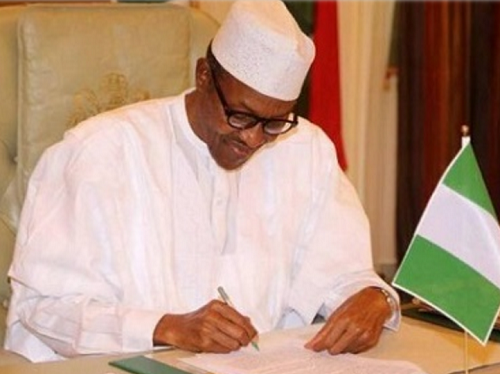 In a bid to hold on to power in 2019, President Muhammadu Buhari has reportedly penciled down six top aggrieved All Progressives Congress, APC stalwarts for ministerial appointment, fresh report according to ThisDay suggests
The report says the new ministers' appointment is a ploy by President Muhammadu Buhari to retool his administration, which would see strong political leaders from the All Progressives Congress (APC) being brought in as ministers to represent the six geopolitical zones in the country.
This is just as the president said Wednesday that it was time for Nigerians to resolve never to provoke another civil war by their actions and inactions, recalling the pain of the tragic loss of human lives during the last civil war.


Buhari who made the remark at the launch of the Armed Forces Remembrance Day Celebrations 2018 emblem and appeal fund in memory of ex-servicemen who lost their lives in the first and second world wars as well as the Nigerian civil war, said honouring the memories of the departed service men was worthwhile and desirable.
The president also swore in the new Secretary to the Government of the Federation (SGF), Boss Mustapha.
Both ceremonies took place ahead of the weekly Federal Executive Council (FEC) meeting in the Council Chamber of the State House.
The swearing-in of the new SGF, however, was the first of a number of measures by the president to inject strong political leaders into his government with the appointment of more ministers.
Buhari had at the meeting of the National Executive Committee (NEC) of the APC held on Tuesday in Abuja, said he would appoint more ministers to his cabinet and fill the vacancies on the boards of several federal government agencies with his party stalwarts who had been agitating that they had been left out since he assumed office two years ago.
The appointment of political stalwarts may not be unconnected to the desire to place key loyalists with the muscle to deliver critical states and zones during the 2019 general election.
A presidency source explained that the new ministers would represent each of the six geopolitical zones in the country, effectively replicating the same cabinet structure used by successive Peoples Democratic Party (PDP) administrations during the party’s 16 years in power.
The source also informed THISDAY that Buhari would ensure that the ministerial appointees are strong political leaders to fill areas that he feels are underrepresented or currently have ministers of state representing the states.
“The goal is to appoint strong political leaders into the cabinet as opposed to most of the technocrats currently in the cabinet.
“With this, the president can bring in people to represent areas like the Tivs in Benue State, as Audu Ogbeh who is currently the agriculture minister, is an Idoma man. Other areas include Kano and Katsina,” the source explained.
Follow Us on Twitter!