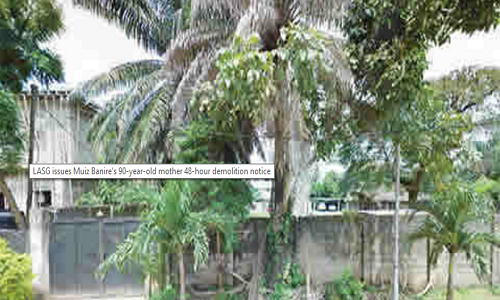 • The house Photo: File
Samson Folarin
There is tension on Remi Fani-Kayode Street, GRA, Ikeja, residence of Alhaja Sarat Banire, who is the mother of the National Legal Adviser of the ruling All Progressives Congress, Dr Muiz Banire, as the Lagos State Government through its Ministry of Physical Planning and Urban Development, has issued the octogenarian a 48-hour demolition notice.
Muiz, who is observing the lesser hajj in Saudi Arabia, described the notice as “politics of vendetta.”
The former Commissioner for the Environment said he acquired the two-bedroomed bungalow on lease from the Federal Government and the family only renovated it.
He condemned the request of the state government for a building permit on a property he claimed was constructed by the Federal Government.
This is coming less a week after the house of a former Deputy Speaker of the Lagos State House of Assembly, Mrs. Funmilayo Tejuosho, was sealed by police operatives who were alleged to be acting on the directive of the Lagos State Government.
Muiz, who issued a statement on the notice to his mother on Wednesday, said the Governor Akinwunmi Ambode-led administration was “hell bent” on persecuting him and his supporters for fighting against the culture of imposition in the ruling party.
He said, “My siblings and I acquired a lease of the property from the Federal Government to serve as a residence for my aged mother. The lease covered the two-bedroomed bungalow already on the land, together with a boys’ quarter. I did not have any reason to rebuild the house or do any further construction as the place was fit for the purpose for which it was acquired on lease.
“I know that since the creation of the lease, my mother has been living in the said two-bedroomed bungalow without adding a block to the property by way of additional construction, development or alteration save minor renovation like painting. The reasons why we could not develop the property to make it more befitting is that we are still awaiting federal consent to the lease created in my mother’s favour.
“Surprisingly, on November 14, the contravention notice purportedly served by government requires that a building permit must be produced for an old building, the existence of which predated the lease by which my mother became the occupier of the premises. The property belongs to the Federal Government of Nigeria who granted a lease to my mother and save for minor renovations to make it habitable, no single efforts at construction or reconstruction has been made by any of us.  How on earth could it be heard that a tenant is required to produce a building permit of a property that belongs to her landlord within 24 hours otherwise she risks demolition of the building?

“I had earlier said that the Lagos State Government, under the governorship of Akinwunmi Ambode, is out on a vendetta and having failed to get me removed as the National Legal Adviser of the All Progressives Congress, has targeted my supporters for persecution. I had been expecting that since I was the ultimate target having received several messages threatening my family members and me, that very soon my property shall become objects of demolition by the vindictive government that is out to wage war against real and perceived enemies. I am, therefore, not surprised to see that my aged mother’s residence is under attack.”
The legal practitioner said the building, which was not posing a threat to anyone, was a target because it was linked to him.
He added that the urgency with which the government demanded the building permit for the house and the 48-hour demolition notice showed the desperation of the state to get at him.
The APC chieftain said he was not moved by the government’s recent “acts of terrorism” against his call for internal democracy in the party and resistance to the culture of imposition which he said were out of personal convictions.
“All necessary reactions to the notice have been escalated to both the Lagos State Government and the Federal Government as I have caused my lawyers to respond to the notice appropriately. I have no doubt that this latest Gestapo tactic is in furtherance of the political victimisation and oppression raging against me and my associates. I am ready for the sacrifice even if I have to, in the process, sleep on the streets of Lagos.
“Rule of law and institution building remain sacrosanct to me. As far as God continues to protect my life, I will remain resolute on it. As the political repression continues, I urge all my followers and supporters to be calm. If God says that my ailing mother at the age of 90 will die in the hands of Governor Ambode, I give God the glory,” he added.
However, in a statement by the Commissioner for Physical planning and Urban Development, Anifowoshe Abiola, the Lagos State Government said Muiz was merely whipping up sentiments by alleging that his mother was the target of the demand for the permit and that the property might be demolished in 48 hours.
He said  neither allegations was a sincere reading of the notice served on the property.
He said, “The contravention notices that went out on Wednesday, November 15, 2017 were a routine exercise served on properties identified by state agents as operating without due permits. Twenty-seven properties were indeed served on that same day, 13 out of which were located on the same Remi Fani-Kayode Street, GRA, Ikeja, where Banire (Muiz) admitted his property was located.
“The 27 properties served across the state are just the first set of an ongoing exercise embarked upon by the Ministry of Physical Planning and Urban Development to validate the records and permits of properties that have undergone ownership transfer processes.
“There is no way Lagos State would have had a pre-knowledge of the owners of the properties in question, let alone target the one that Banire has identified to be his own. This is a routine and lawful exercise that ought not to be confusing to a supposedly learned gentleman who has had the privilege of serving in the Lagos State cabinet for many years.”
The commissioner said according to the Lagos State Urban and Regional Planning and Development Law 2010, what a contravention notice demanded was evidence of a planning permit on the existing structure, in order to avoid demolition of what would be deemed a contravention, if such a permit was not produced within the stipulated time as required by law.
Follow Us on Twitter!