Mugabe and his luxury-loving family 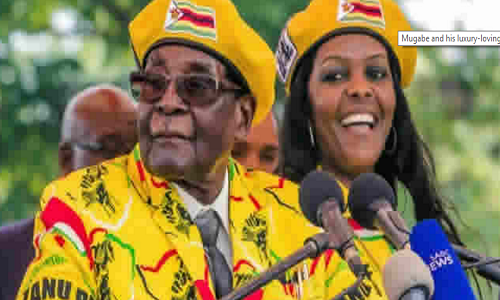 Robert and Grace Mugabe.
Chux Ohai
When embattled Zimbabwean President Robert Mugabe assumed office as the country’s Prime Minister in April 1980, one of the first things he did was to create a government of national unity.
With this single action, Zimbabwe became the beneficiary of much aid from generous Western countries, whose governments believed that he was going to position the country to help to facilitate the then Apartheid South Africa’s  transition from minority rule to a proper democracy.
At the outset, Mugabe’s government operated within a capitalist framework and focused on wooing foreign investors. The result is that between 1980 and 1990, the Zimbabwean economy grew by an average of 2.7 per cent a year. This was considered a welcome development by those who genuinely looked forward to the advancement of the country.
Unfortunately, an unprecedented growth in the population of the country and a corresponding rise in the unemployment rate, as well as a persistent declaration of a budget deficit by the government, soon made nonsense of any form of economic growth.
Still, during Mugabe’s tenure as Prime Minister, Zimbaweans witnessed significant increases in government spending on education and healthcare. Between 1980 and 2000, for example, the number of secondary schools in the country rose from 177 to 1,548. During that period, the adult literacy rate rose from 62 per cent to 82 per cent.
In spite of these heartwarming strides, Mugabe was unable to deal with the worsening relationship between his government and the minority white population, which repeatedly accused him of racial discrimination.
Ugly human rights record
Also, for the greater part of his tenure, Mugabe’s government was accused of having one of the worst human rights records in Africa. And there seems to be ample evidence to justify this.
There were allegations that Mugabe ordered the country’s military, especially the dreaded Fifth Brigade, an elite force trained by North Koreans, to crack down on dissidents in Matabeleland with such great force that shocked the global community in the 1980s.
The Fifth Brigade, according to independent reports, were deployed in the region in 1983 with a mandate to arrest, torture and execute those accused of being sympathetic to the dissidents. The Brigade was also authorised to destroy valuable property belonging to the accused and to carry out extra-judicial killings.
The scale of the violence recorded during the Zimbabwean military’s genocidal campaign in Matabeleland was described as greater than what the country witnessed in the Rhodesian War.  Indeed, over the course of four years, about10,000 civilians had lost their lives to these butchers. Genocide Watch later estimated that more than 20,000 were killed.
There were also widespread reports of journalists being arrested and tortured by the military.
During the 2013 election campaign, reports had it that members of the opposition Movement for Democratic Change were often harassed by the police and Army. In some cases, it was alleged, they were killed. The Zimbabwe Human Rights Forum documented about 27 murders, 27 rapes, 2,466 assaults and 617 abductions, with 10,000 people displaced by violence. It was also alleged that most of these actions were carried out by supporters of Mugabe’s Zimbabwe African National Union-Patriotic Front.