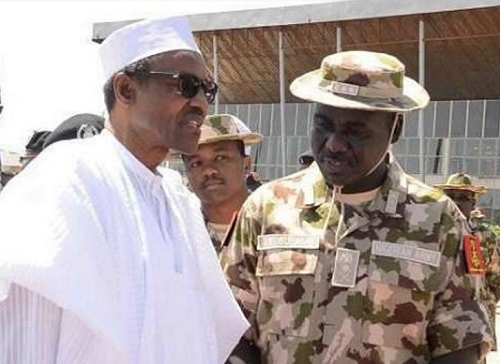 Members of the Nigerian troops in north eastern part of the country under the operation tag, ‘Operation Lafiya Dole’ have written an emotional letter to President Muhammadu Buhari and the Chief of Army Staff, Lieutenant General Tukur Yusufu Buratai in response to his recent letter  to  the team.
The army chief had in a recent letter sent to the troops in the battle field encouraged them never to give up on their quest to bring back lasting peace to the volatile region.
Buratai subsequently promised to off-set the two months’ allowances owed soldiers involved in Operation Lafiya Dole.

The troops in the letter on Monday evening asserted that the COAS’ recent letter to them in the battle field was a boost to their muscles.
The letter jointly signed by Pte Samson Okwudili, Sgt. Aliyu Bala, WO2 Bode O. Ola assured president Buhari and the army chief that the  troops won’t relent until the battle over insurgency is  totally won.
The letter reads:
“Sir, on behalf of Nigerian troops of the “Operation Lafiya Dole,” we acknowledge with joy, the receipt of your endearing letter of encouragement, commendation and assurances to the Nigerian Army troops on special assignments’ within and outside Nigeria, dated, November 5, 2017.
“Similarly, we are extending our heartfelt appreciation to the Commander-In-Chief of the Armed Forces of Nigeria, President Muhammadu  Buhari (GCFR) and the Minister of Defence, Gen. Monsur Dan. Ali (rtd) for their endless support and encouragement of the Nigerian Army and the Nigerian military generally in the face of the daunting and multifarious insecurity challenges confronting our dear country, Nigeria.
“We also, seize this unique opportunity to send our special salute to you, the Corps Commanders and Commanders of Nigerian Army Training Institutions in Nigeria.
“Sir, we cannot conceal our excitement over the good news conveyed by your letter to us at the warfront. We are disarmed and encouraged by the soothing words of encouragement, commendations and assurances from your splendid and patriotic leadership of the Nigerian Army in the last two years.  We dare say, your mail to us is timely, comforting and a morale booster to greater determination and result-orientated military expeditions by the troops of “Operation Lafiya Dole in Maiduiguri.

“We cannot pretend that your humble message to us has enlivened our spirits and energized our strengths to unfathomable depths. It has again,   reactivated our sense of patriotism, loyalty, commitment and rededication to our professional duties. We are indeed motivated and in high spirits to defiantly pursue the cause of the defence of the territorial integrity and sovereignty of our beloved country,  Nigeria, by ensuring the  final termination of Boko Haram Terrorism and other sects of  armed local conflicts  afflicting the nation.
“Sir, may you be informed that troops are not unmindful of the tendency of insurgents to attempt a bounce back anytime to undermine the successes so far recorded by the military in the counter-insurgency operations. We are not unaware that some unscrupulous elements within and without, may set out to mastermind such aberrations’ by sowing seeds of discord among troops and their commanders.
“Please, you have our assurances, never to neither let you down or allow terrorism in whatever guise sprout or fester in any part of the country. We are prepared never to accept unwholesome influence in our fold, until collectively; the final song of victory against terrorists is chorused.
“We further wish to specially acknowledge you, our Chief Commander and   COAS, for your sterling leadership qualities and purposeful leadership of the Nigerian Army. We have all come to know you as not just as astute leader of Nigerian troops, but a reformist, performer, comforter, a humanist, a welfarist, an exceptional officer and stickler for high professional discipline and performance. We pray God to continue to replenish your wisdom and strength to lead us to further victories in battle.
“ Therefore, we wish to end with our open appreciation of   the priority, premium and seriousness you attach to matters of welfare of troops. The prompt and timely  payment of  salaries and allowance of troops, especially, those at the warfront, the expeditious attention to the medical needs of troops, particularly, those injured on the battlefield, the special attention you pay to  welfare of our families back home and your economic enhancement packages for soldiers have infinitely endeared us to you and your leadership. We are obliged to reciprocate same through impressive performance.
“Lastly,   we are impressed with the unflinching support extended to your leadership of the Nigerian Army by President Muhammedu Buhari and the Minister of Defence.  Please, convey our assurances to them about our resolute confidence and determination to emerge victorious from the terrorism wars against our country soonest.”
Follow Us on Twitter!