OPINION: Yahaya Bello, The Worst Mistake In Our political Sphere, By Abdulkareem Adehi 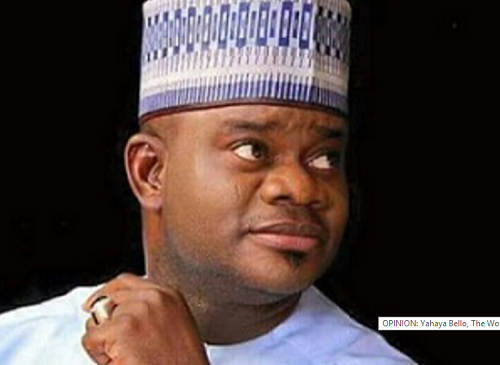 By Abdulkareem Adehi, Abuja
Since the creation of Kogi state in August 1991 along with few other states of Katsina and Edo ,the current negative political development spearheaded by Yahaya Adoza Bello orchestrated by the death of our most cherished Governor in waiting and posthumous Governor ,Prince Abubakar Audu,Kogi state had witnessed the most horrible situation in its political life not commensurate with the military era
‎With the present political predicament occasioned by the political leadership under the tyrannical and undemocratic practice of Yahaya Bello, it had juxtaposed the general notion and parlance of 'the worst civilian administration is preferable to the best military government'.For kogi,the reverse is the case,as 'The worst military administration is better than the best civilian administration'
I have my justification of been vainglorious of the military administration in kogi,powered by Colonel Danladi Zakari,Bzigu lassa Afakiriya,Paul Omeruo in all ramifications particularly on the welfare of civil service and pensioners.During their short stint,salaries of civil servants was prioritised with workers getting salary advances ‎to mitigate pressing family matters even though workers were inherited from the then kwara and Benue state

The military junta never left without displaying their human and public office traits as schools,hospitals,and housing estates ‎were constructed for workers in the state capital on owner occupier basis to give meaning to the lives of the working class
The present administration of Alhaji ‎Yahaya Belllo had been a nightmare to kogians,visitors,settlers with unfavourable security situation like high scale armed robbery,frequent kidnapping,murder of innocent citizens and all vices underplaying the fast deteriorating social and economic powers of average kogians with state,local government workers and pensioners as the main target
The so called manipulated and divine intervention that ushered in the Yahaya Bello's government on 27th January 2016,had become an unsolicited efforts by power players to feast on kogi commonwealth and inflict on ordinary kogians having denied them their living wages and their entitlements
In the history of kogi state ‎in the last two decades,the volume of funds in refund,bailout,paris club,special grants,improved allocation/IGR  and windfall of 450 billion was attracted to kogi in the last 22 months have been encouraging and unprecedented ,yet,the rate of crimes and criminality,deaths,sickness,sufferings,diseases and what have you rose astronomically owing to deliberate siphoning of public funds,denials,greed,avarice and glaring maladministration by Yahaya Bello and his kindergarten team
The endless and inhuman conducts of the present leadership has its roots from Yahaya Bello‎, from his refusal to pay workers and pensioners at all levels their entitlements/wages,indefinite suspension of Permanent secretaries and senior civil servants, recall of indicted and suspended civil servants on ethnic coloration,and series of screening/verificaation exercise for more than one year with controversial recommendations and reports

In the last 22 months,what is prevalent on all medium is 'God win,White lion,New direction' tantamount to deciet and directionless government that cannot meet its obligations of paying workers and pensioners their wages with abandoned projects after flag off to decieve unsuspecting electorates and innocent kogians with haywire media hype and alerts to contractors
It is only in kogi,with manifestly weak governance that salaries of workers have become an object of controversy with workers unions laying claims to 20 months,18 months,16 months,and 4 months salary arears while government stick it's neck to ‎owing just few months using kogi tax payers money to fund her designed full of error'Clock in,Clock out format against the labour laws with five weeks old strike with no  end in sight.The death of Edward Soje,a director with TSC,justified the workers agitation even when governor Bello told nigerians lies about kogi workers salaries but his HOS confirmed arears of 10 months for the late director
In the last twenty two months,Innocent civil servants have lost their lives as a result of the ‎screening exercise centralised in lokoja,from accidents to kidnappings,certificate theft and sickness that has led to the death of over 70 state/local government  workers reported officially,while others committed suicide viz politically motivated killings by the agents of the state government with the recent one in okene of a labour leader while others have fled the state over threats to their lives
Yahaya Bello after the much awaited teleguided reports of workers screening, declared most of the state workforce and local goverment as'ghosts'but later reversed part of its decision through pardon,yet salaries of those on the list of pardoned workers is still outstanding since January this year proscribing all workers unions,ASUU,ASUP,SANNU,NASU,JAC in kogi while the people awaits the government next line of action of hammer on the state NLC on his inablitiy to convene a wide range consultations with the labour union and inability to pay their wages
All these anomalies had been the other of the day from Yahaya Bello amidst over bloated and lame duck political appointees with outrageous salaries and over inflated contracts,large retinue of aides and  ‎outrageous convoy far more than Nigerian president with security men feasting on kogi commonwealth in a peaceful atmosphere while the defacto governor and mere Chief of Staff to the governor had in its fleet auto rides that surpass that of Aba Kyari,the chief of staff to President Muhammadu Buhari
Since assumption of duty in January 2016,‎No new hospitals, except closing down the existing ones,no new roads,no new water projects with the hitherto functional greater lokoja water works now history,educational institutions from primary,secondary, and tertiary under the grip of operation with its IGR contrived under state TSA been siphoned by the top government functionaries
The remains of kogi is only the story in town of how properties were been acquired in high brow areas within and outside the country by the governor and it's cohorts particularly in Abuja,lagos,kano,kaduna,makurdi,Jos and partly the state capital,lokoja to the detriment of infrastructural and social investment to the people of the state,workers/pensioners  salaries and contractors‎ emoluments
How can a government  planning to effect another change in the stooged state house of assembly,sacking of suspended and recalled permanent secretaries,retiring directors from ministries,agencies and departments of government and reverting workers who were transfered from one ministry to the other in the last ten years back to their original ministry and threats to sack workers involved in the ongoing strike action.Is these their entitlements or survival strategists ?
Inspite of Presidency intervention and directives to kogi governor to without further delay offset ‎the backlog of salaries of kogi workers running into billions of naira and perpetually starving the working class in kogi into hardship and penury,there is no sigh of relief to ensure the living wages of the civil service is brought to fruition
Abdulkareem Adehi is a social commentator, writes from FCT Abuja