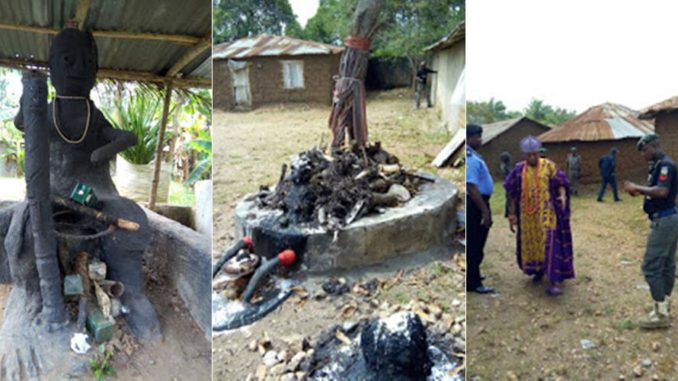 The Osun State Police Command, yesterday, uncovered two ritualists den in Elewonta village of Ayedire South Local Government Development Area of Iwo, in the state.
According to CityMirror, the Assistant Inspector General of Police, Zone 11, Agboola Osodi-Glover directed his officers to inspect the shrine said to belong to a man popular called Melue.
The man was arrested overnight by the police following a tip off by residents of the village where the den was located.
The suspect conducted security men round the venue besieged with fetish and concocted items with many undergrounds after which the police promised adequate investigation and prosecution.
Reacting to the development, Oluwo of Iwo, Oba Abdulrosheed Adewale Akanbi, cautioned ritualists and fraudsters to stay off the town or incur royal curse.
Another den at Olanbiwonnu village purportedly belonging to the same Melue was also uncovered.
Photos below;