Home » opinion » Rev. Bempah Insist — Something Tells Me “Jesus Christ Is Fake, He’s Not Truly The Son Of God”

Rev. Bempah Insist — Something Tells Me “Jesus Christ Is Fake, He’s Not Truly The Son Of God” 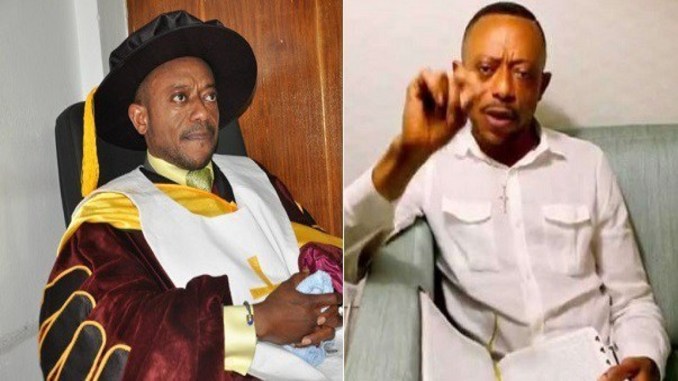 A popular Pastor in Ghana, Rev. Isaac Owusu Bempah, the General Overseer and Founder of Glorious Word Power Ministry International, has brought in another dimension to the general belief by Christians that Jesus Christ is the son of God by saying He is fake.
Rev. Bempah who is seen as one of the most controversial religious figures in that West African country made the shocking declaration in an interview with a television station, Kofi TV when he said Jesus Christ is not the son of God and is fake.
In the exclusive interview, the very outspoken man of God insisted that the real name of the son of God who came to die to save the world is ‘Yeshua HaMashiach’ and that Jesus Christ was an impostor. In his words, Yeshua means ‘Salvation’ while HaMashiach means ‘The Anointed One’, wondering how Christians all over the world have been hoodwinked to think Jesus is the true son of God when in fact, he is not.
Rev. Bempah maintained that ‘Jesus of Nazareth, the man we read about in history books and in the New Testament, was merely a fabrication of first-century Romans, who created his gospels as a way to quell the messianic fervor of the Jews’.
He further stated that Jesus was just a tool of psychological warfare used by the then Roman emperor, Constantine, to get the Jews to stop causing trouble and love their Roman overlords.
“This move by the Romans made Christians to believe in a new deity called Jesus, a celestial being subordinate to God.”

Rev. Bempah conceded there are many contradictions in the Bible due to translation but that he knows the truth and is all out to liberate humanity.
According to Rev. Bempah, the real son of God is called Yeshua Hamashiach and not Jesus Christ as many Christian leaders want their followers to believe.
“Yeshua Hamashiach was given birth to by a woman on earth and was crucified by Plato and rose from the grave the third day into the skies with the hope that he will return same as prophesied by angels.
He is called the Lion of the Tribe of Judah. Jesus Christ is not the name of the son of God. There was this man who came called Nero who was killing the followers of Jesus’ Christians who were not even called Christians but Nazarenes,” he opined.
He added that miracles happen when pastors mention the name of Jesus because they operate with the spirit of Yeshua HaMashiach, stressing that Yeshua HaMashiach is the name forever known in Heaven, and must thus be accepted by all, especially believers on Earth.
Follow Us on Twitter!