SO SAD! Heartbreaking Details Of What Killed Father And Son In Anambra State Almost Same Day Emerge As Their Obituary Poster Went Viral 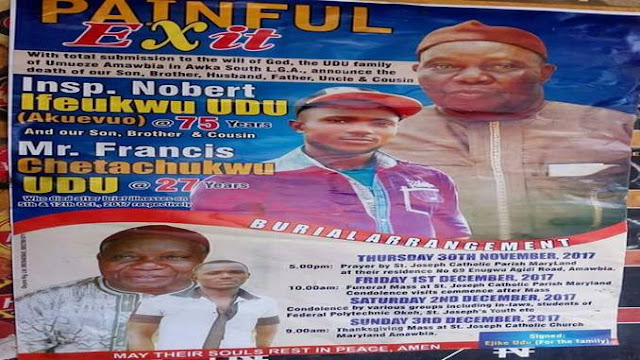 While going through what killed father and son set to be buried same time and same day kindly pay your last respect to them by typing RIP in the comment box below…An Igboman and son from Anambra State died after a brief illness they will be buried on the same day at the same time.
A Facebook user, Kingsley Braen Nze Osisikankwu, who took to the social media platform to mourn them, revealed that the late Insp. Nobert Ifeukwu Udu, 75, and his son Mr. Francis Chetachukwu Udu, 27, died on 5th and 12th of October respectively, suffered the same sickness.

The late inspector and his son will be buried on the 1st of December, 2017, at their hometown, Amawbia in Awka South Local Government of Anambra State.
May their souls rest in peace (Amen)