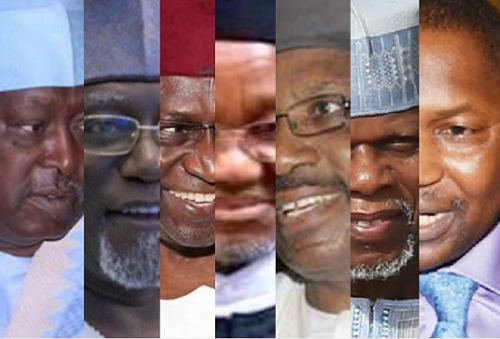 FLASH BACK
Once upon a time, Nigeria was under the influence of a group known as the Kaduna Mafia. It was a group of politicians, young intellectuals, top civil servants, businessmen and high ranking military officers from the northern part of the country.
It was believed to had operated from Kaduna, the capital city of the defunct Northern Region.
They were so powerful that no key decision of the government, including appointments in the civil and security services could be executed without their knowledge.

The Kaduna Mafia held the levers of power and influence in Nigeria right from the 1966 counter-coup down to the rebirth of democracy in 1999.
They toppled every government that did not have their imprimatur during that era and any attempt to topple governments installed by them was treated as a rebellion and brutally crushed.
Many of its members were educated at the famous Barewa College and possesed a certain level of managerial competence. They were known for their intelligence, commitment to the traditional values and socio- political and economic interests of Northern Nigeria.
The group thrived on a robust network of alliances among northern aristocrats and top government functionaries who favoured the group’s northern and Islamic bent. Although it operated like a cult and had no open register, some famous names associated with the group include, Adamu Ciroma, Mamman Daura, Ibrahim Tahir, Shehu Musa Yar’Adua, Mahmud Tukur and Mohammadu Buhari.
THE CABAL
In the last two and half years of President Muhammadu Buhari’s administration, a lot of strange and unimaginable things have happened around the corridors of power. Although many Nigerians from across regional divides made enormous sacrifices to ensure that All Progressives Congress (APC) won the historic election that brought Buhari to power, his famous “I Belong To Everybody and I Belong To Nobody” declaration in his inaugural address was a shocker to many of his benefactors who thought they were equal stakeholders in the new administration by virtue of their sweat and toil during the electioneering campaigns.
By the time, Buhari made his first set of appointments, political pundits were quick to identify that he actually belonged not to every Nigerian. It soon became apparent that his words and actions were guided by an informal group he had assembled to work with him.
In essence, those who are familiar with this shadowy group believe that they are behind the many controversial appointments of the Buhari administration. They are the brains behind the absolute secrecy surrounding the health of President Buhari and his frequent trips abroad to seek medicare.
They are the Cabal, a congregation of very close family members, trusted friends and political associates. They share a common ideology of holding strongly to political power and advancing the economic interests of the group and the North. They are an offshoot of the once dreaded Kaduna Mafia.
Earlier in the year when President Muhammadu Buhari’s health deteriorated and he was flown abroad to receive medical care, a member of the Arewa Consultative Forum (ACF), Dr. Junaid Mohammed, had accused some key officials of the Presidency of manipulating the situation for their own selfish reasons.
Mohammed, a medical doctor and former member of the House of Representatives, argued that by denying Nigerians free access to the President and keeping the status of his health as a secret, the officials whom he referred to as the cabal in Aso Rock were working behind the scene to feather their own nests.
According to him, the cabal was an offshoot of the once dreaded Kaduna Mafia which held sway in the 1980s, adding that, its members were exploiting the poor health status of the President by getting him to sign away huge contracts worth billions of dollars.
In an exclusive interview with Sunday Telegraph, Mohammed named one Mamman Daura, said to be a nephew to President Buhari as the head of the cabal. According to him, Daura is being assisted by Alhaji Abba Kyari, the Chief of Staff to the President. He also named the then Secretary to the Government of the Federation , Mr Babachir Lawal, as a member of the group.
Mohammed said Nigerians should not blame anybody but Buhari himself and the people he brought into power for whatever mess his administration is recording because “these people” will continue to hold Buhari and the whole of Nigeria captive.
First Lady, Hajia Aisha Buhari, had an interview with the BBC, Hausa Service, where she alluded to the presence of a group who have held her husband captive. Although she did not give any names, her description of the modus operandi of the group perfectly tallies with what Junaid Mohammed had told the world.
Members of the cabal have unfettered access to the President and they are usually abreast of his thinking and policy directions. They are his ardent supporters who do the odd jobs to safeguard the regime. They have their hands in every pie and have been fingered in most controversies, scams and scandals that have bedevilled the current administration.
Profile of those Nigerians believed to be member of the Cabal in Aso Rock.
•MAMMAN DAURA
Alhaji Mamman Daura, is an uncle to President Muhammadu Buhari. Although Daura is two and half years older than the President, the nephew-uncle relationship has been extremely close and dates back to their childhood years. For the two men, it has been bond of blood and mutual respect.
It is said that Buhari had always listened to and confided in Mamman Daura because of the mutual trust both men had cultivated over the years. However, critics say the relationship is too close for comfort because it has practically made Mamman Daura the defacto President in the current administration.
Daura is said to have studied Economics but went into journalism and rose to become Editor of The New Nigerian in the 1970s.
When the then Major Geberal Muhammadu Buhari overthrew the democratically elected government of President Shehu Shagari in 1983, Daura was one of the few people that Buhari trusted enough to give principal advisory roles. He later served as Head of the African International Bank and also chairman of the board of the Nigeria Television Authority (NTA).
Mamman Daura is alleged to have influenced most of the controversial appointments President Buhari made since the administration came into power. Daura was the one who singlehandedly brought up Abba Kyari, the current Chief of Staff to the President. No doubt, he simply brought into his uncle’s administration, his foster son.