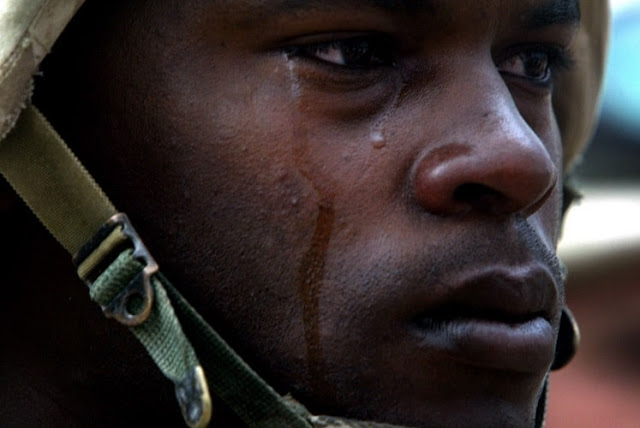 A soldier who refused to disclose his identity has written a letter to President Muhammadu Buhari to complain about the alleged corruption in the army.
The officer on the frontline of the war against insurgency wrote the letter in reaction to the army’s dismissal of the complaints of Abdulrauf Aliyu, a private of the Nigerian army.
Aliyu had complained that he was abandoned after being shot by suspected Boko Haram insurgents.
But Sani Usman, spokesman of the army, denied the allegation, saying Aliyu was declared a deserter for leaving the hospital he was receiving treatment without being cleared by the authorities.
Usman said as a deserter, Aliyu should be apprehended and handed over to the nearest military unit or police station, if seen.
“This is a clear case of a deserter from the Nigerian army trying to run a campaign of calumny against the Nigerian army on Social Media,” Usman had said.
But the soldier who wrote the letter spoke in defence of Aliyu and also drew attention to the plight of his colleagues.
He said knowing what they signed for, soldiers “expect to die in the hands of the enemy, not in the hands of the Nigerian Army”.
The letter in full:
Having read the online correspondence between Dr. Idris Ahmed of CUPS and our Army spokesman, Brigadier General S.K. Usman, I have decided to take a major risk and write to your Excellency directly over this issue.

Sir, I am a course-mate of Pvt. Abdulrauf Aliyu, who Oga S.K. claimed that he has gone AWOL. We trained at the same company, Depot Nigerian Army, Zaria, Kaduna State. We are presently posted to Operation LAFIYA DOLE. On behalf of all the colleagues of Pvt. Abdulrauf Aliyu, I categorically refute the allegation that Pvt. Abdulrauf Aliyu deserted the Army. The Sections 59 – 63 of the Armed Forces Act, Cap A20, Laws of the Federation of Nigeria 2004, as quoted by Oga S.K., has always been mentioned by our superiors, to protect themselves and antagonise us, whenever they have done mischief.
Your Excellency, the case of Pvt. Abdulrauf Aliyu is actually not an isolated one. There are many such cases of soldiers who got wounded on the battlefront. It is true, some are well looked after, as mentioned by Oga S.K. Usman in his press release. Unfortunately, due to corruption in the system, some unfortunate soldiers, mostly from less privileged backgrounds, are left to fend for themselves. Like myself, Pvt. Abdulrauf Aliyu comes from a humble family. He sustained life-threatening injuries in the abdomen during a routine operation. The initial first aid treatment and medical care that he received was very inadequate. With full Army permission, Pvt Abdulrauf Aliyu and his family paid for his transfer to University of Maiduguri Teaching Hospital. Unfortunately, the care he received in Maiduguri Teaching Hospital too was inadequate. Eventually, his family had to pay for his transfer to a specialist facility in Sokoto.
Your Excellency, corruption in the Army is REAL, and it is killing us. Every man and woman who decided to join the Army knows the risks. While we expect to die in the hands of the enemy, we don’t expect to die in the hands of the Nigerian Army, due to corruption and criminal negligence.
Just the other week, about 14 (I am not sure of the exact numbers) of our colleagues died in the hands of Boko Haram, who attacked the Army camp. The circumstances surrounding their unnecessary death warrants a full investigation by his Excellency. Sir, you will be shocked of the outcome. The bodies of the slain heroes are still lying here in Damaturu, Yobe State. The story of this incidence has hardly been officially published by the Army or Nigerian media. Attached is the picture of the commander of the camp. He too died in the attack.
Your Excellency, this is the third month in a row that we have been denied of our operations allowance. We have to rely ONLY on our meagre salary for everything. From battalion commanders, to Company and Sectors leaders, we are all in debt, because our salaries are not enough to sustain us at the battlefront while feeding our families back at home. It is a big shame that we have joined the Army to defend the civilians, yet we have to go to the civilians in town to borrow money to fend for ourselves at the battlefront.
Take for instance the food that we are fed. Most of the times it is not fit for human consumption. I attach for your perusal, your Excellency, the lunch that was fed to us this afternoon (3/11/2017). As you can clearly see, there is not a single piece of meat or fish in it. The taste of the food is so bad that we have to add surplus salt to be able to eat it. This is also dangerous for our health. A plate of our food per soldier is probably about two hundred Naira (N200).
It is said that the Federal Government spends about fourteen thousand Naira (N14,000) on each prisoner in Nigeria. Here, at the battlefront in Operation LAFIYA DOLE, the Army spends about six hundred Naira (N600) per day per soldier on feeding us, while in reality billions of Naira is appropriated per year for this purpose. Your Excellency, we are treated like animals. Most of us are afraid to talk because of the dire consequence.
As the Commander in Chief of the Armed Forces, your Excellency, kindly investigate. There is corruption in the Army. Brave soldiers are needlessly dying.
Follow Us on Twitter!