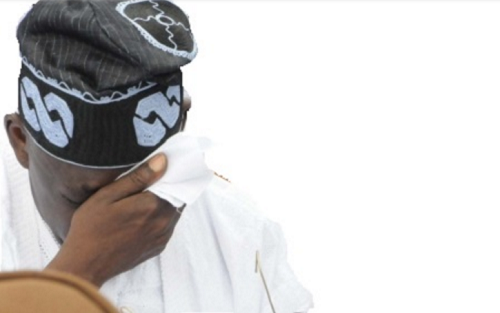 The All Progressives Congress (APC) national leader, Bola Ahmed Tinubu, who lost his first son, Jide, on Tuesday, has revealed that his late eldest son died of cardiac arrest. Speaking through his media aide, Mr. Tunde Rahman, Tinubu said his 37-year-old son died of cardiac arrest, stating that he was saddened by the development.
Tinubu in a statement by his aide, said: “My son was a highly intelligent person with a vibrant personality and a zest for life. He followed his own course and made his own way on his own terms. “Those who knew him could not help but like him. Yet, he was taken away by cardiac arrest when it seemed he had so much life to still live.”

However, the clarification by Tinubu emerged as it was gathered that the APC national leader and his wife, Senator Remi, had left for London to be with Jide’s wife and kids. Despite that, condolence messages continued to pour in yesterday following the death of Jide. While expressing gratitude to Nigerians for commiserating with his family at this moment of grief, Tinubu particularly thanked President Muhammadu Buhari, Vice-President Yemi Osinbajo, Senate President Bukola Saraki, state governors, members of the National Assembly, APC leaders, traditional rulers and well-meaning Nigerians for their warm exhale of love and support.

Tinubu had also noted that his son lived to fulfill what he wanted and on his terms. The statement reads: “My son was a highly intelligent person with a vibrant personality and a zest for life. He followed his own course and made his own way on his own terms. “Those who knew him could not help but like him.
Yet, he was taken away by cardiac arrest when it seemed he had so much life to still live. Jide lived in London and he’s survived by a wife and three boys. Tinubu said he and his wife, Remi, have gone to London to be with Jide’s young family at this painful time to support and help them.” Meanwhile, the former military Head of States, Gen. Ibahim Babangida (rtd) had also sent a heart-warming condolence to Tinubu.
His letter reads partly,“It struck me with helpless awe to learn of the sudden death of your first son Jide, on October 31. I feel a sense of personal loss over this sad incident which usually tends to test our faith in Allah as we sojourn through life.” In similar vein, the senators from the South-West region of the country have expressed great shock and sadness at the untimely death of Jide.
The senators were led by the lawmaker representing Lagos East Senatorial District, Senator Gbenga Ashafa, who described the death of the APC leader’s son as colossal loss. Some of the Senators who accompanied Ashafa to pay their condolence to Tinubu at his Abuja residence included Senator Adeyeye (Osun Central), Senator Babajide Omoworare (Osun East), Senator Solomon Olamilekan (Lagos West), Senator Abdulfatai Buhari (Oyo North), Senator Monsurat Sumonu (Oyo Central) and Senator Adesoji Akanbi (Oyo South). In a statement issued shortly after the visit led by Ashafa, the senator said: “I received with shock and great sadness earlier today the news of the demise of Mr. Jide Tinubu, the son of our leader, Asiwaju Bola Ahmed Tinubu.” He described the late Jide as a “hardworking gentleman who was so full of life and ideas.”
He went further to pray for the repose of the soul of the late Jide and wished the family the fortitude to bear the loss. In his words, “My heart and prayers are with Asiwaju and his family at this time of grief. May the soul of Mr. Jide Tinubu Rest in Perfect Peace.”
Follow Us on Twitter!