Why I Actually Went Into Hiding - Maina Speaks from Hiding In A leaked Letter, Accuses David Mark-led Senate of Aiding Pension Real Thieves 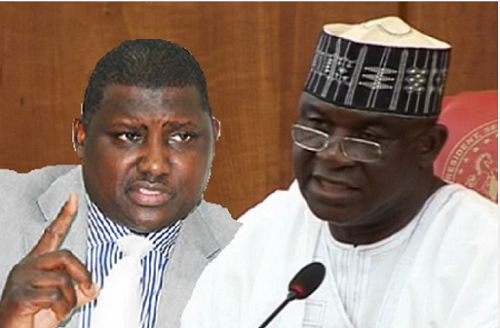 Alhaji Abdulrasheed Maina has said he was forced into hiding while his life was under threat following a gunshot attack on his person in front of the Head of Civil Service Office, where his office was located in February 2013.
This is even as the embattled ex-Chairman of the Presidential Task Force on Pension Reforms also accused the 7th Senate, led by David Mark, of aiding the real pension thieves, fresh report according to Punch Newspaper says
The accusation, according to Punch Newspaper contained in a letter which leaked on Friday, was written to the Senate on June 19, 2015.

In the letter, Maina alleged that over N3tn hidden had yet to be recouped from 97 pension offices before he fled the country.
Maina said in the letter that he was seeking a review of his case.
A reachout to the firm representing Maina,  by Punch Newspaper, Messrs Mamman Nadir & Co., on 36 Ali Akilu Road, Kaduna, which confirmed the authenticity of the leaked letter.
The letter, referenced PRTT/PEN/NASS/SEN/16/ VOL1/05, was channelled through Senator Nneji Achonu’s (Imo North Senatorial Zone) office to the Senate President.
The letter was titled: “Pension reform task team — Appeal for review of investigation by the Senate Joint Committee on Establishment and Public Service and States and Local Government Administration, 2011 – 2013.”
In the letter, Maina noted that the task team, which took off effectively in January 2011, saved the country N1.6tn from “pension thieves,” adding that “we used financial intelligence to achieve groundbreaking achievements in our assignment.”
He said the team’s efforts led to the arrest of 46 persons involved in the looting of pension funds and were handed over to the Economic and Financial Crimes Commission, which is now conducting the trial.
From the leaked letter, it appeared that the pension boss resurfaced in the country shortly after the inauguration of the President Muhammadu Buhari administration on May 29, 2015.
The letter read in part, “We, members of the Pensions Reform Task Team, wish to use this medium to apologise for our little late response to reaching back to you. We had to put the issues together and source for appurtenant materials. We appreciate your understanding, sir.
“As a refresher, the PRTT was inaugurated on June 10, 2010, by the immediate past administration of Dr. Goodluck Ebele Jonathan, GCFR, with a clear mandate to restructure the Head of Service Pension Office, Police Pension Office, among others. We did our utmost best with precision and national interests as our guiding principles.
“The PRTT took off effectively by January 2011. We used financial intelligence skills to achieve groundbreaking achievements in our assignment.

“N256bn is still stolen monthly. As it is, there is a leakage of N256bn monthly from the current IPPIS, which needs to be blocked urgently. We are also aware of some government hidden accounts which need to be mopped up. We can be used to engage any department of government in sanitising the financial workflow to avoid loose ends that remain susceptible to leakages.
“Based on the revelations of massive/monumental fraud and outright stealing of pension funds, which was brought to public attention by the PRTT, the 7th National Assembly by resolution dated November 2, 2011, mandated its Committee on Establishment and Public Service, State and Local Government Administration, to conduct a comprehensive investigation into the management and administration of Pension funds in Nigeria.
“There were general expectations that the various dimensions of irregularities associated with the management of pension funds in Nigeria would come to an end as a consequence of the investigations being conducted by the Senate Joint Committee.”
Maina maintained that while the Senate haunted the task team, the same body favoured the “pension thieves,” adding that the Senate Joint Committee ended up creating more problems than solutions to the endemic corruption and fraud prevailing in the system.
He said that before leaving Nigeria following threat to his life, the PRTT had worked so hard that pension payments stabilised.
Maina noted that the biometric system adopted by the team exposed 73,000 ghost pensioners in the office of the Head of Service alone.
“Some pensioners got a backlog of about 30 years paid into their accounts. All payments were ordered under the signature of the Head of Service monthly,” Maina said.
Also, Maina disclosed that shortly after he was forced out, the Office of the Head of Service was enmeshed in a N35bn fraud.
He added that the ICPC conducted an investigation into the matter but regretted that “till date, they have yet to commence the prosecution.”
“Today, it (pension) is worse with the Police Pension Office, where millions are taken out of pension funds daily. We have pieces of evidence to substantiate this,” he added.
Maina noted that his dismissal process was concluded under 36 hours without giving him the opportunity to be heard.
“As we write to you, Abdulrasheed A. Maina has been dismissed from the Civil Service for being absent for three days, while his life was under threat following a gunshot attack on his person in front of the Head of Civil Service Office, where his office was located in February, 2013. Attached are copies of letters from the Nigeria Police Force. ANNEXURE 3 (a) and (b),” the statement said.