Home » news » Abaribe asks judge to inspect Kanu’s home in Abia, threatens to do this

Abaribe asks judge to inspect Kanu’s home in Abia, threatens to do this 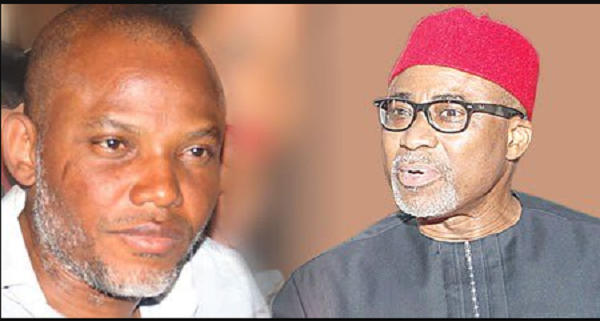 Senator Enyinnaya Abaribe, who is one of the three sureties for the missing leader of the Indigenous People of Biafra, Nnamdi Kanu, has urged Justice Binta Nyako of the Federal High Court in Abuja to visit the IPOB leader’s home allegedly invaded by soldiers in Abia State in September.
Justice Nyako on Tuesday adjourned Kanu’s trial until February 20, 2018.
Abaribe, whose motion asking for the court’s order compelling the Chief of Army Staff, Lt. Gen. Tukur Buratai, to produce Kanu, is still pending in court, filed his fresh motion on December 4, 2017.
The motion, filed by his counsel, Chukwuma-Machukwu Ume (SAN), urged the court to visit and make physical inspection of the incident of the invasion and occupation of Nnamdi Kanu’s residence, at Isiama, Afaraukwu Ibeku Umuahia Abia State, from September 11 to 14, 2017, and the alleged subsequent arrest and “taking away of Kanu by the Nigerian Army.”
As part of the grounds of the motion, Abaribe contended that Kanu was at his residence before and all through the period of September 11 to 14, 2017 at Isiama Afaraukwu Ibeku, when the house was allegedly invaded by soldiers.

His lawyer stated, “Applicant’s agent has been severally prevented by agents of the Nigerian Army (6th respondent) as well as other security agents from accessing the residence of Kanu at (Isiama Afaraukwu Ibeku) as to show the court the characters of the invasion and occupation of Kanu and the eventual arrest and taking away of Kanu by the staff and agents of the Army.
“The applicant is desirous of the court seeing and examining Kanu’s residence which has been stated as an evidence before the court.”
He added, “The application will help the court and indeed the applicant in the determination of his application before this court.
“The applicants’ application cannot be determined nor resolved by mere documents as described on the exhibits before the court but physical inspection of the said property.”
Deborah Warrie who deposed to an affidavit filed in support of the motion, stated, “That sometimes in 2017 or thereabouts, the Nigerian Army High Command on the instructions of the Chief of Army Staff announced publicly that they were going to commence a military operation exercise code named a operation a python dance in the whole of South East from September 15 to October 14.”