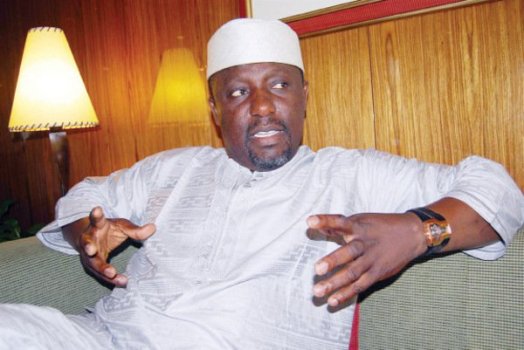 Imo State Governor Rochas Okorocha has decried the use of public funds to purchase arms and fighter jets to kill Nigerians.
He stated this when  Air Officer Commanding Ground Training Command, AVM Sampson Akpasa, visited him at the Government House in Owerri.
The Governor said the root causes agitations should be addressed instead of buying fighter jets and weapons to kill our own people.
He attributed the ongoing agitations to unhappiness which he said informed his interest and desire to create the Ministry of Happiness and Purpose Fulfillment.
He noted that agitations, insurgence, hate-speeches and the likes, come up when people are unhappy.
His words: “I thank you for your efforts in bringing Regiment 211 to Imo State. In appreciation, we have donated a 200-bed hospital to the force. This morning I spoke to the Chief of Air Force, about our intention to also donate the school to train electricians and artisans; you are doing a wonderful job.

“But if you can observe recently, the level of crisis and agitations are on the increase. While we fight insurgence, I would want to advise that we also should go deep down to find the root cause of this agitation.
“Agitation comes up when people are not happy, and the whole essence of life is to be happy. For this reason, I will advice that the Air Force too, just like I did recently, which most people didn’t understand, should create a department for Happiness and Purpose Fulfilment. This will help to address the need of even junior officers, who may have some forms of dissatisfaction in the discharge of their duties. Sometimes, you may think they are happy when they are not, and this sabotages the efforts of the Federal Government.
“Mentorship is another aspect which can help people achieve their purpose in life. If people are happy, there will be less agitation. The amount of money we spend on air crafts and in the purchase of arms would have reduced by 50 per cent. This could also end issues of restructuring, Niger Delta and all other forms of agitations…”
Follow Us on Twitter!