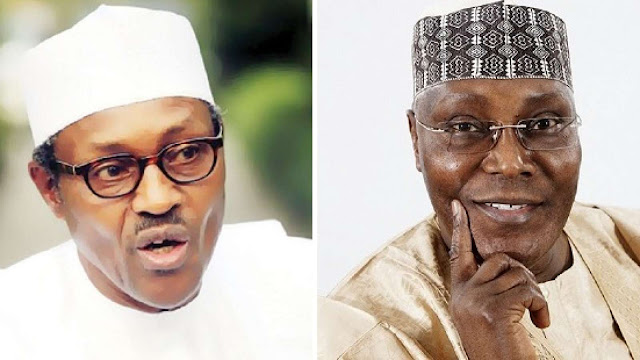 US-based Sahara Reporters columnist has said there is nothing between former Vice President Atiku and President Muhammadu Buhari the two being of Fulani descent.
He said zombies have actually been ruling Nigeria which speaks volumes for the decay and backwardness Nigeria has witnessed since independence some 58 years ago.
''As we make our dumb descent into 2019, Nigeria's political theater reveals insights about just how absurd our politics has become. The recycled candidates may be ridiculous, they're are often more transparent versions of 180 million dumb Nigerians who keep electing them into office.
Zombies have been ruling Nigeria since independence 58 years ago. No wonder gingivitis has been eroding the gum line of this great nation long enough. A country's future depends on its ability to bite back. For 2019, Nigerians are presented with two well-known satirical candidates: one is for cow grazing, the other wants to build or rebuild Nigeria as a cow shed. The two candidates have for decades been entertainers and spectators simultaneously. After all, silliness is good for democracy. Court jesters and satirists have played a vital role. In many ways, they point out the absurdities of our political system and process.
Buhari and Atiku are warming up for 2019. They have become hits on social media. Facebook has a bunch of groups dedicated to them. “Atiku for president.” “Four more years for Sai Baba to finish his war on corruption – JOIN OR DIE.” With the presidential election due 2019, the audacity of the two comedy candidates to run in 2019 represents a damning indictment of Nigeria's beleaguered politics. It exposes the dearth of leaders with spine to turn things around in this impoverished nation of Africa. More importantly, it reveals the Fulani new game plan: Buhari and Atiku for president.
The Fulanis are trying to outsmart Nigerians by making sure they retain and control the center and its resources for the next two decades or so. Their political calculation is simple: take control of the two major political parties – APC and PDP - and the rest is history! APC is stranded with Buhari. And PDP will be stuck with Atiku. The choice for Nigerian electorates is between two Fulanis. A choice between a Satan and a Lucifer and ultimately we'll end up with one. The end justifies the means!

Atiku left APC for PDP citing threadbare, worn out, old political cliches: “I've served Nigeria in different capacities and I am one of the most experienced leaders around today,” he told Dele Momodu in an interview. “I have a rich knowledge of Nigeria and what it would take to move us to the height of greatness,” continues Atiku. “They can also trust me that I'm not coming to government to steal their money,” says Atiku. The two comedy candidates are jokes for this run down nation. Atiku is a sleazy and sneaky politician that should be christened “Preletacevic” a Serbian word which denotes somebody who switches political parties for personal gain. Buhari is a spectator president.
Atiku, a pony-tailed pretender with little in the way of political sagacity besides maintaining the status quo, is the incarnation of another northern jester and deceiver. Atiku is a representative of the endemic graft and greed of Nigerian politics. As we inch closer and closer toward 2019, we must not let hero worship, political cultism, good PR and media charisma displace our ability to review the candidates in all their capacities.
Without a sharp critical assessment of leadership and duties of leadership, we will continue to elect and reelect entertainers, jesters, spectators, sweet faced teddy bears, cool cats, as opposed to strong visionaries. So in place of redressing ownership of our democracy and resources, we'll elect plunderers as opposed to empowering our people. We become parasites and appendages as opposed to being rich citizens in our rich land. This is a serious matter because millions of our people are suffering, dying, hopeless, helpless, homeless, jobless for no other reason than the terrible choice of electing the wrong people.
The president we want for 2019 must be a leader who is sincere and understand opportunities and foster innovation. The president must be equipped with wisdom, intelligence, creativity, sound judgment, foresight, courage, boldness, and above all the confidence to inspire others. The blind cannot lead the sighted. The uninformed cannot lead the wise. The unskilled cannot direct the the skilled. And those that are deaf cannot define the sound. Corruption is not only about stealing funds. It is also about putting bad people in leadership positions. People who have neither the passion (sincerity) or the qualifications (skills) to do the job. This form of corruption has crippled Nigeria for 58 years from developing, advancing, progressing, and prospering. Corruption is worse than murder. It kills more than warfare. It takes the land and money to build hospitals and buys a private jet, condemning millions of our people to die of curable diseases and avoidable manufactured poverty.
Real leaders do not prey and play to the passions and prejudices of the people they serve. They instruct them in ways which foster their envelopment and enhance the quality of their lives. For 2019, we need a president with the best insight, track record, and the skills to get the job done. We don't need a president who will surround himself with village friends, families, and acquaintances, with none with the qualifications for the post other than being a clan members. The price of nepotism causes a complete failure of any country, or an organization. Nigeria political history is replete with such horror story. We need a new political party by youths and for youths that will produce a government by youths and for all Nigerians that will sent packing the old recycled politicians with no utilitarian value.
The two Fulanis – Buhari and Atiku – are the wrong people for 2019.''
Follow Us on Twitter!