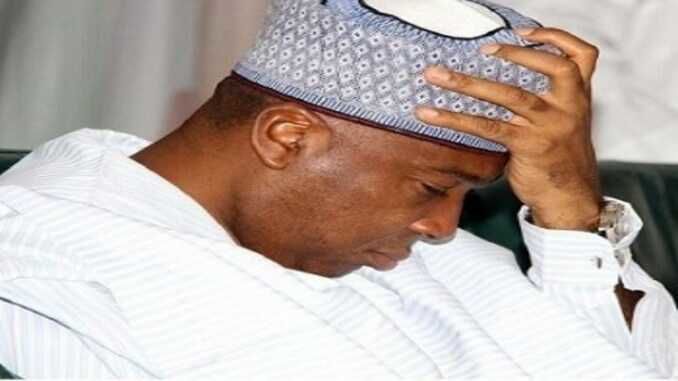 The Court of Appeal in Abuja has ordered Senate President Bukola Saraki to face trial on three count charge
Saraki is facing trial on false assets declaration, but Saraki’s legal team said it has concluded plans to appeal the three charges at the Supreme Court
The Court of Appeal in Abuja on Wednesday, December 12, dismissed 15 out of the 18 counts of false assets declaration instituted against the Senate President, Bukola Saraki, before the Code of Conduct Tribunal, Punch reports.
The three-man panel of the Court of Appeal led by Justice Tinuade Akomolafe-Wilson unanimously ordered the Senate President to return to the CCT to face trial on three of the counts.
ASO ROCK IN TROUBLE AS APPEAL COURT ORDERS SARAKI TO FACE TRIAL

The Senate President’s legal team, however, said it had concluded plans to appeal the three other charges at the Supreme Court Recall that in a unanimous decision, the two-man panel tribunal headed by Justice Danladi Umar, held that federal government failed to prove essential elements of all the allegations it leveled against Saraki.
Also recall that the tribunal held that oral and documentary evidence that the federal government adduced before it were discredited during cross-examination, saying that the proof of evidence was so ‘manifestly unreliable that no reasonable court or tribunal could rely on it to make any conviction.’
Meanwhile, A popular online media has revealed that bulletproof car allegedly acquired by Saraki for N298m is rotting away at Custom yard in Lagos
The vehicle was said to have been seized in January this year is at the facility of the Federal Operations Unit (FOU) Zone A of the Customs in Ikeja
Follow Us on Twitter!