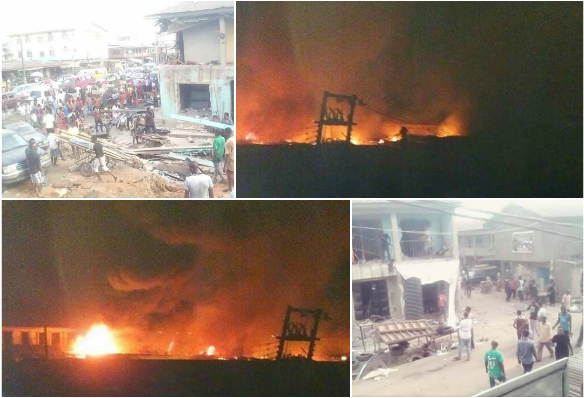 New market Owerri goes up in flames, demolished after confrontation between Gov. Rochas and market people
The popular and biggest spare parts market in Owerri, New Market Owerri, was today reportedly demolished by the Imo state government, and just minutes ago, some unidentified persons, reportedly set the market on fire.
Gov. Rochas according to another eye-witness, was thrown pure water and his clothes drained!

Here’s what Facebook users are reporting;
New Market Owerri on Fire now!
After a confrontation between Imo State Governor, Rochas Okorocha and market men and women in New Market Owerri today Wednesday, 13th December, 2017, were Governor Okorocha was reportedly thrown pure water sachets for forcefully ejecting the shop owners out of business and means of livelihood by demolishing their shops.


The governor, thereafter warn them to leave before Friday . Shockingly before the Friday deadline, New Market Owerri was this Night Set on Fire by unidentified persons