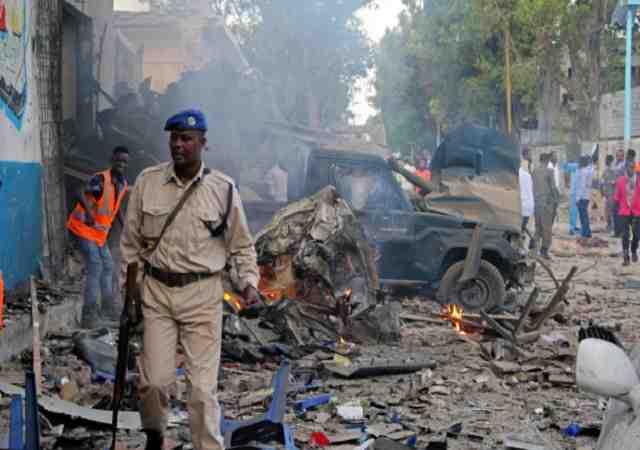 A suicide bomber from Somalia’s Shabaab insurgents killed 18 police officers and wounded 15 others on Thursday when he blew himself up inside the country’s main police academy, the force’s chief said.
Witnesses said the police were gathered in a square ahead of their early morning parade when the bomber attacked in the capital Mogadishu.
Although the official toll was put at 18 dead, the Al-Qaeda-affiliated Shabaab claimed responsibility and put the toll at 27 dead.
The assault is the latest in a decade-old battle by the jihadists to overthrow Somalia’s internationally-backed government.
“Eighteen members from the police were killed, and 15 others were wounded, after a suicide bomber blew himself inside the academy,” acting police chief General Muktar Hussein Afrah told reporters.

The attacker disguised himself in a police uniform to access the camp, Afrah said.
“Some of the police were already in lines, and others were gathering, when the man in police uniform entered and blew himself up,” said bystander Hussein Ali, describing the carnage.

Medics and ambulance teams rushed to take the wounded to hospital and collect the corpses.
Officers said the toll could have been far worse had the attacker detonated his bomb in the centre of the crowd.
“The bomber could have inflicted more casualties if he could have managed to reach the midpoint where most people were,” police officer Ibrahim Mohamed said.
Later Thursday, police attended the funerals of some of their colleagues killed in the attack.
Follow Us on Twitter!