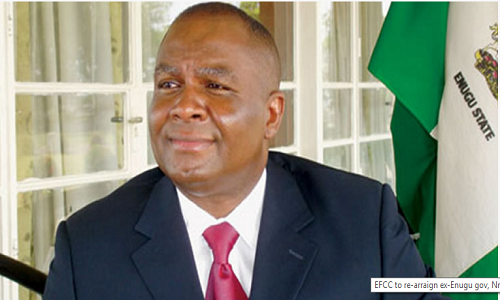 Ex governor of Enugu State Chimaraoke Nnamani
Oladimeji Ramon
The Federal High Court in Lagos has fixed December 4, 2017 for the re-arraignment of a former governor of Enugu State, Chimaroke Nnamani, who was charged with an alleged fraud of N5.3bn.
The case, which was fixed for Thursday before Justice Chuka Obiozor, could not proceed due to the absence of both the prosecutor, Kelvin Uzozie, and Nnamani himself, who was said to be out of the country.
When the case was called on Thursday, a lawyer from the chambers of Mr. Rickey Tarfa (SAN), M. Bamidele, announced appearance for Nnamani, but said the ex-governor was outside the country.
Bamidele said his law firm got notice for Thursday’s hearing only six days ago, a notice, he said, was too short to contact Nnamani, who was away.
On his own part, the prosecuting counsel for the Economic and Financial Crimes Commission, Uzozie, wrote to the court seeking an adjournment.

Justice Obiozor, consequently, fixed December 4 for the re-arraignment of the ex-governor and his co-defendants.
The judge rejected the plea by the defence lawyer for longer adjournment to enable the firm adequate time to contact Nnamani.
Justice Obiozor said having just been assigned with the case which has lasted for 10 years; he could not be seen to be allowing further delay in the case.
Justice Obiozor is the fourth judge to handle the case, which began in 2007.
The case has been handled by Justices Tijani Abubakar, Charles Archibong (retd.), and Mohammed Yunusa, who was suspended by the National Judicial Council over corruption allegations.
The trial has been stalled since July 5, 2015, when some of the defendants entered into a plea bargain and forfeited their assets before Justice Yunusa.
Follow Us on Twitter!