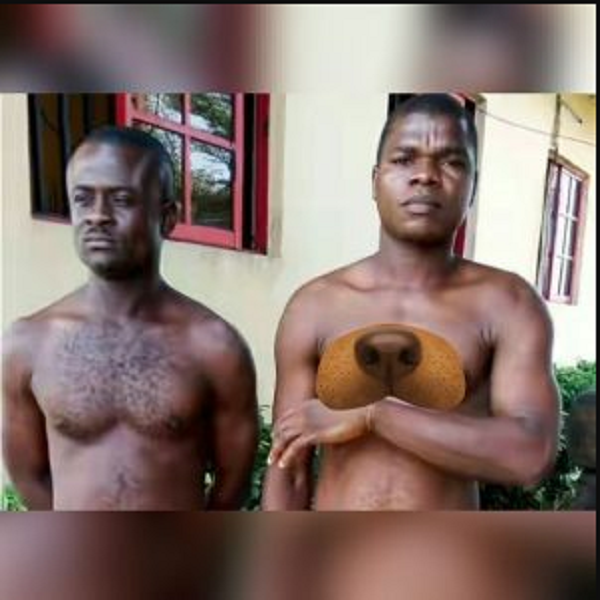 Two persons parading themselves as officers of Federal Special Anti-Robbery Squad (F-SARS), have been arrested by Rivers police command.
The suspects; Kenneth Obunwa, and Oluwagbenga Abe, were apprehended on Tuesday morning at Igwuruta near Port Harcourt in Ikwerre LGA of Rivers state.
The state Commander of SARS, Akin Fakorode while parading suspects, said they were arrested after the command received a distress call around 7 a.m. on Tuesday.
He said: “F-SARS received a distress call that Obunwa and Abe, who claimed to be operatives of F-SARS, accosted Pastor Finan and his younger brother and subjected them to thorough search in their compound at Igwuruta, with undisclosed sum of money extorted from them.
“The suspects impersonated as operatives of F-SARS and they have been doing it for a while.

“We quickly responded to the distress call, because the members of the public adequately utilised the distress lines that we gave. We traced the impersonators and we arrested them.
“We have a lot of miscreants who are impersonating security agents, especially F-SARS, thereby harassing, intimidating and extorting money from innocent members of the public, who ought to be very vigilant.
“I wish to admonish members of the public that whenever they find operatives of F-SARS extorting money or persons claiming to be from F-SARS, but involved in impersonation, they should please notify F-SARS through these numbers: 08054000001, 08057000002 and 08057000003, as well as Rivers State Police Command’s Control Room numbers: 08098880134 and 08032003514.”
Fakorode added that the two suspects would be thoroughly investigated and would appear in court soon to serve as a deterrent to other criminal-minded persons.
Follow Us on Twitter!