Fashola humiliated as Senate walks him out of chambers on Thursday 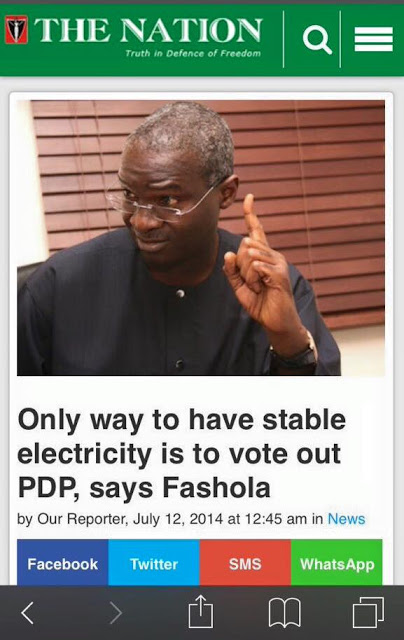 THE Senate yesterday,  walked out the Minister of Power, works and Housing, Mr Babatunde Fashola over what they described as his “unpreparedness to face the committee for his 2018 budget defence.”
The senate also took a swipe at the Rural Electrification Agency, REA , a parastatal in the Ministry of Power for planning to spend a total sum of N10 billion on solar power projects  in nine universities in the six geo-  political zone of the country.
This was raised yesterday,  when the Managing Director of REA, Mrs Damilola Ogunbiyi appeared  before the Senator Enyinnaya Abaribe(PDP, Abia South) led Senate Committee  on Power, Steel Development and Metallurgy to defend the 2018 budget proposals of the agency.
On Fashola, who was walked out, Senator Abaribe disclosed that the Ministry wrote the Committee that Minister was ready to appear before the Committee, adding that he would come to defend the budget of the power sector of the ministry next week Monday.


On the turning back of Fashola, Abaribe said that the minister told the committee that he was not ready to face members, just as he said that the minister did not come with necessary documentation to present to members, adding that the committee should have been furnished with necessary documentations to enable members peruse over them.
On the solar power project,  Vice Chairman of the committee, Senator Buka Mustapher insisted that the details of the power solution projects in universities must be disclosed as well as details of “who is paying for the installations when the power sector had been privatized.”
Meanwhile, REA boss, Mrs Ogunbiyi, who responded, noted that it was the responsibility of the Federal Government to provide power in the rural areas, adding that most of the universities were located in rural areas. She however did not define “rural areas” as demanded by the committee.
Another member of the committee, Senator Mohammed Hassan said that the committee could not understand why the agency was spending huge amount of money to provide solar power in universities when rural communities for which the agency was created are left in darkness. (VANGUARD)
Follow Us on Twitter!