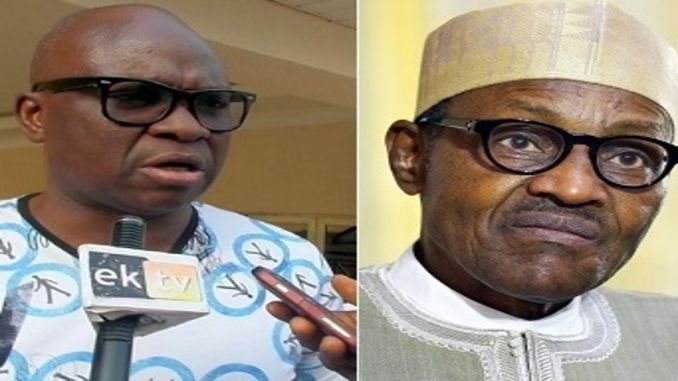 Fayose Declares – Buhari/FG Reason For Withdrawing $1bn Excess Crude Money Is A Blatant Lie {Read This}
Ekiti State Governor, Mr Ayodele Fayose has described the decision to withdraw $1 billion from the Excess Crude Account to fight Boko Haram insurgency in the North-East region as a means by the All Progressives Congress (APC) led federal government to fund President Muhammadu
Buhari’s re-election in 2019.
“For posterity sake, I wish to place it on record that I was not among the governors, who approved the withdrawal of almost half of our savings in the Excess Crude Account, which belongs to the three tiers
of government to fight an already defeated insurgency,” he declared.
He made this comment in a statement issued to NEWSFLASHNGR.COM in Ado Ekiti on Friday, and signed by his Special Assistant on Public Communications and New Media, Lere Olayinka, Governor Fayose said; “Since they said they have defeated Boko Haram, what else do they need a whopping sum of $1 billion (over N360 billion) for; if not to fund the 2019 elections?
“The APC promised to wipe out Boko Haram within six months, now it is 31 months and what the APC government is wiping out is the economy of Nigeria and the means of livelihood of the people,” Governor Fayose said.

The governor said N360 billion was equivalent to what the Federation Account Allocation Committee (FAAC) share to the federal government, 36 States and 774 Local Councils monthly, nothing that “Nigerians deserve proper explanations from the federal government on the rationale behind spending such huge sum of money to fight an already defeated Boko Haram.”
He challenged the federal government to make available to Nigerians, how the money released by international donors for the fight against Boko Haram was spent, adding that; “Even the Transparency International (TI) once said in its report that some top military officials in the country were feeding fat from the war against Boko Haram by creating fake contracts and laundering the proceeds in the United States, United Kingdom and elsewhere.”
The governor also alleged that the N50 billion kept by the Nigeria National Petroleum Corporation (NNPC) in different commercial bank accounts outside the Treasury Single Account (TSA) on the directive of President Buhari’s Chief of Staff, Abba Kyari was part of the fund being kept to fund President Buhari’s election in 2019.
Governor Fayose said; “Nigerians are alarmed by the revelation from the House of Representatives that President Buhari exempted NNPC from transferring N50 billion to the TSA, and the Central Bank of Nigeria (CBN), confirmation that a letter issued by the Chief of Staff (CoS) to the president, Abba Kyari conveyed the directive.
“Also, they are miffed by the federal government’s idea of withdrawing $1 billion from the Excess Crude Account to fund an insurgency they said had been defeated.
“They went on to tell Nigerians that the decision was taken by governors of the 36 States, whereas, it was solely the idea of the federal government, which they used the arranged National Executive Council meeting to achieve.
“The question is; how can the federal government alone spend almost half of the Excess Crude money that belongs to the three tiers of government (i.e. Federal Government, States and Local Councils)?
“The reality is that our treasury is daily being looted in readiness for the 2019 elections. Nigerians are therefore alerted to this lootings by the APC led federal government to amass huge fund for the
2019 elections under the pretense of fighting insurgency in the Northeast as well as other dubious means.”