Finally, UN breaks silence over US recognition of Jerusalem as Israeli's capital city 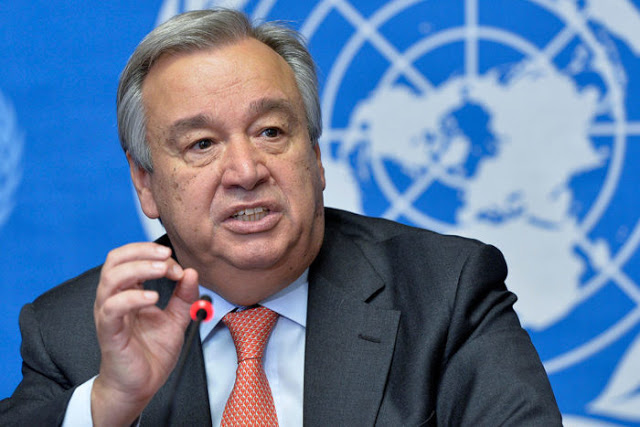 UN Secretary-General António Guterres has stressed the need for a two-state as solution to the lingering conflict between Israel and Palestinian.
Guterres made the remarks in the wake of the announcement by the U.S. President Donald Trump recognising Jerusalem as the capital of Israel.
The UN chief stressed that Jerusalem was an issue that must be resolved through direct negotiations between the parties.
“In this moment of great anxiety, I want to make it clear: there is no alternative to the two-state solution.
“There is no ‘Plan B’, Guterres said while speaking to the press at UN Headquarters in New York.

The UN chief stressed the need to realise the vision of two states “living side-by-side in peace, security and mutual recognition, with Jerusalem as the capital of Israel and Palestine, and all final status issues resolved permanently through negotiations”.
According to him, it is only through that realisation that the legitimate aspirations of both peoples would be achieved.
“I understand the deep attachment that Jerusalem holds in the hearts of so many people. It has been so for centuries and it will always be,” he added.

He also noted that since he took up his post as UN Secretary-General, he had consistently spoken out against any unilateral measures that would jeopardise the prospect of peace for Israelis and Palestinians.
“For my part as the UN Secretary-General, I will do everything in my power to support the Israeli and Palestinian leaders to return to meaningful negotiations and to realise this vision of a lasting peace for both people,” he stated.
Trump had while announcing his recognition of Jerusalem as Israeli capital, said his decision marked “the beginning of a new approach to conflict between Israel and the Palestinians”.
He recalled that in 1995, Congress adopted the Jerusalem Embassy Act, urging “the federal government to relocate the American embassy to Jerusalem and to recognise that that city – and so importantly – is Israel’s capital”.
According to him, the act was also passed in Congress by an overwhelming bipartisan majority and was reaffirmed by a unanimous vote of the Senate only six months ago.
For over 20 years, every previous American president has exercised the law’s waiver, refusing to move the U.S. embassy to Jerusalem or to recognise Jerusalem as Israel’s capital city. (NAN)
Follow Us on Twitter!