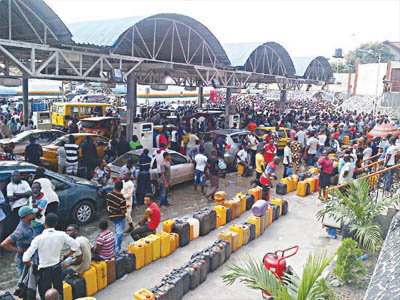 Fuel queues have resurfaced in Sokoto metropolis and its environs, creating hardship for motorists and commuters.
A  correspondent reports that the queues, which started two days ago, became worse on Monday morning as motorists resorted to panic buying.
Some of the filling stations belonging to Independent Petroleum Marketers Association of Nigeria (IPMAN) have increased the price of a litre of petrol from N145 to N150 per litre.
At NNPC mega stations and other filling stations run by major marketers, the queues were longer, as they maintained the official price of N145 per litre but were reluctant to sell to motorists.
Some motorists on queue expressed displeasure about the situation and urged the government to act fast before it degenerated into a major problem.
“We were happy that fuel scarcity during the yuletide had become history, only for the problem to resurface now.
“Efforts must be made to curb the problem; especially with the current socio-economic realities in the country,’’ a Motorist, Mr Sifawa Ahmad said.

Another motorist, Mary Onya said the situation was a cause for concern and government must take immediate action.
Sokoto Operations Controller of the Department of Petroleum Resources (DPR), Mr. Mohammed Makera, said  that the problem would soon ease off.
“Expectedly, the problem will soon ease off as we will find out what the problem is and everything will be under control soon.
“Officials of the DPR have embarked on sustained monitoring and surveillance and any marketer found wanting will face necessary sanctions, ’’ Makera said.

He appealed for more patience and implored people to avoid panic buying in view of its associated dangers. (NAN)
Follow Us on Twitter!