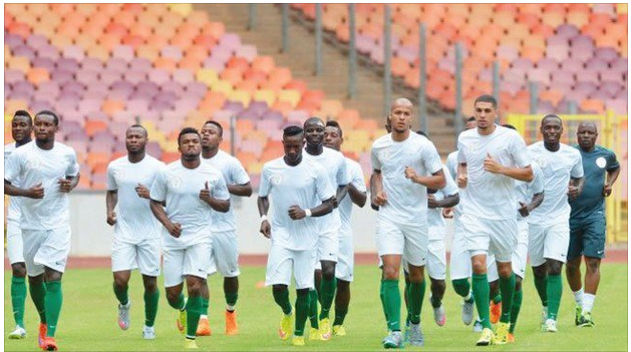 The Super Eagles escaped being kicked out of the 2018 World Cup, after FIFA awarded three goals and three points to Algeria on Tuesday. Nigeria was sanctioned for fielding Shehu Abdullahi. The fullback was ineligible to feature in the qualifying game. However, for some reason, nobody was able to point that out to Gernot Rohr.
The president of the Nigeria Football Federation (NFF), Amaju Melvin Pinnick, had tried to explain why that happened.
“Shehu Abdullahi got his first yellow card in our very first preliminary match against Swaziland away. When the draws for the Group Stages were made, the Technical staff made a grave error; assumption. They assumed the cards gotten prior would not count.

“To be fair to them, through out the qualifying series, official match documents didn’t even show that Shehu Abdullahi was on a yellow card. For instance, when we played Cameroon, Mikel, Moses and Balogun were put on notice that they had yellow cards.
“Team meetings were even held about how to handle their cards so they wouldn’t miss crucial games. Shehu Abdullahi was never in the mix. Shehu then recieved a yellow against Zambia in our penultimate game, two years after the Swaziland match.

“Another grave mistake then occurred. Fifa sent an email to the technical officer in charge, that Shehu Abdullahi was suspended for the Algeria match. In a twist of fate, that officer was in hospital, with a severe heart condition, battling for his life,” he wrote on his verified Twitter page.
Thankfully, Rohr’s men had one of the most impressive run towards Russia 2018. The Eagles were the first African nation to qualify for the mundial, finishing the series with 14 points, six more than Zambia.
Now, imagine if the gap between the Eagles and the Chipolopolo was lesser.
It would have been most painful for football-crazy Nigerians, whose expectations rise by the day, no thanks to the 4-2 victory over Argentina in an international friendly match.
The anticipation increased again, after the draw for the tournament was made on December 1. The former African champions have been drawn against Argentina (yes, again), Croatia and Iceland.
However, with the sanction and fine out of the way, the NFF would have taken note and put necessary measures in place in their administration unit.
And of course, focus on preparing the Eagles, to soar at next year’s final.
Follow Us on Twitter!