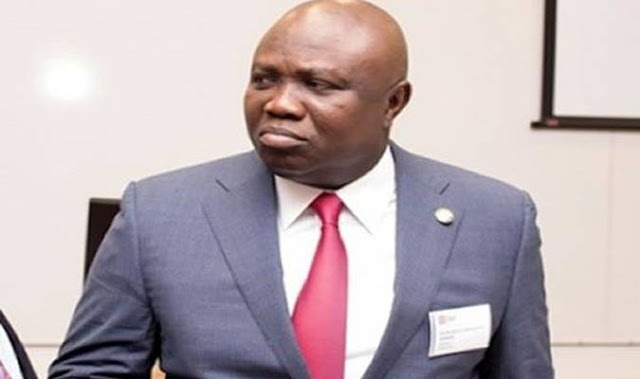 Lagos State governor Akinwunmi Ambode on Monday presented the 2018 budget of N1.046 trillion to the state House of Assembly.
The budget, tagged: “Budget of Progress and Development” is 28.67 per cent higher than that of 2017 which was N812 billion.
The 2018 budget has a capital expenditure of N699 billion and a recurrent expenditure of N347billion.
The capital to recurrent ratio of the budget stood at 67:33.
“The budget will be used to consolidate on infrastructure, education, transportation/traffic management, security and health with an added emphasis on mandatory capacity building for civil servants, all teachers in public secondary / primary schools, officers in the health service sector and women and youth empowerment,” he said.

Ambode said that the estimate of total revenue for year 2018 was N897.423 billion of which N720.123billion would be generated internally.
According to him, a total of N148.699 billion will be sourced through deficit financing within the state’s medium term expenditure framework.
He said that in 2018, economic affairs would continue to dominate and get the largest allocation of the budget adding that there was a lot to be achieved in the coming year.
According to Ambode, as at Nov. 2017, the 11 month period revenue performed at N448.396 billion at 76 per cent compared to full year’s performances in 2016 of N449.609 billion at 83 per cent and N399.382 billion at 82 per cent for 2015.
“Suffice it to say that the overall budget performance stood at 74 per cent as at Nov. 2017 and it is projected to close at 80 per cent by the end of the year 2017.
“The state average contribution to the National Gross Domestic Product (GDP) from 2015-2017 remains strong at about 30 per cent,” he said.
Giving highlights of the sectoral allocation for 2018 budget estimate, Ambode said that General Public Services got an allocation of N171.623 billion while Public Order and Safety got N46.612 billion.
He said that N473.866 billion was allocated to Economic Affairs while Environmental Protection got N54.582 billion N59.904 billion and N92.676 billion respectively for Housing and Community Amenities and Health respectively.
Recreation, Culture and Religion got an allocation of N12.511 billion while Education and Social Protection got an allocation of N126.302billion and N8.042 billion respectively.

“I want to sincerely thank all Lagosians, our leaders, statesmen and citizens for their superlative support thus far, most especially our tax payers throughout Year 2017.
“It is our resolve in 2018 to strive and complete all ongoing projects in order to meet their specified completion period and embark on new strategic projects.
“We intend to improve on our IGR in the face of the dwindling accruable revenue allocation from the Federal Government, sustain our vision on wealth creation and poverty alleviation.
“It is our desire to maintain the tempo of continuous construction, rehabilitation, upgrading and maintenance of network of roads throughout the length and breadth of the state including those within the boundaries of Lagos and Ogun States.
“With the favourable weather conditions prevailing now, this year’s Local Government Roads totalling 181 will be commenced as contractors will be mobilised immediately.
“We have made provisions for continuous gridlock resolution, junction improvement, construction of more laybys and advancement of signalisation that will improve traffic congestion especially along the Lekki-Epe corridor.
“Other key projects that we have provided for include, the Agege Pen Cinema flyover, alternative routes through Oke-Ira in Eti-Osa to Epe-Lekki expressway, among others
He said that the government would consolidate on the Lagos bus reform project with the introduction of high and medium capacity buses, construction and completion of bus depots at Oshodi, Anthony, Yaba and many
Follow Us on Twitter!