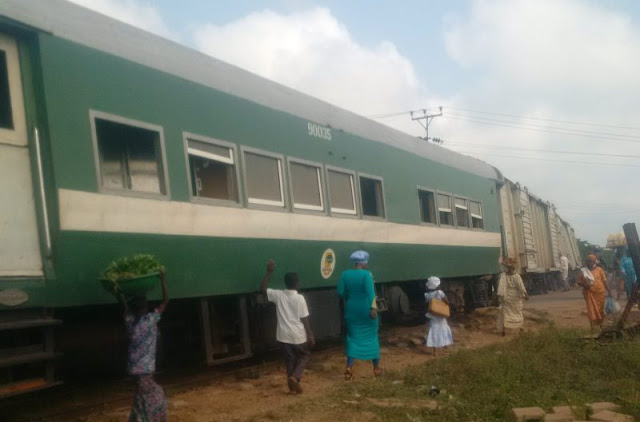 A train transporting fertilizer from Lagos to Kaduna on Sunday derailed at Omi-Adio area of Ibadan, Oyo State, blocking the railway crossing and causing gridlock.
No life was lost and no loss of goods was recorded as a result of the derailment.
An official of the Nigeria Railway Corporation in Ibadan, who spoke on condition of anonymity because he was not authorised to speak on behalf of the NRC, said the Ibadan office of the NRC had no equipment to channel the train back on the rail.
He, however, said the railway crossing had been cleared for vehicles to pass.

He said, “The train, which is called Fertilizer Special, was conveying fertiliser from Lagos to Kaduna en-route to Ibadan. It derailed around Omi-Adio in Ibadan and could not continue the journey. The train did not fall off the track, so no injury was recorded and no life was lost. Because it did not fall, it did not spill its contents. It has to be re-railed before it can continue. Unfortunately, what is required to do that is a crane, which is not available in the Ibadan office of the NRC.
“What is available here is the track jerk which cannot do work of this magnitude. A crane has to be brought from Lagos for the train to continue the journey. The delay is inevitable after what happened. Officials of the NRC in Ibadan responded immediately after the incident happened and the railway crossing has been cleared for vehicles to pass.”
Asked if the incident was caused by faulty or ageing railway track, the official said thorough assessment of the incident had yet to be carried out.
“The train might have derailed due to a few technical reasons that included a gap in the track. But we cannot say what actually caused it for now until a thorough investigation is carried out by relevant teams of assessors from the NRC,” he added.
The District Manager of NRC, Ibadan, Mr. Akinwale Akintola, confirmed the incident.
He said investigation was on to unravel the circumstances that led to the accident and to forestall a recurrence. (NAN)
Follow Us on Twitter!