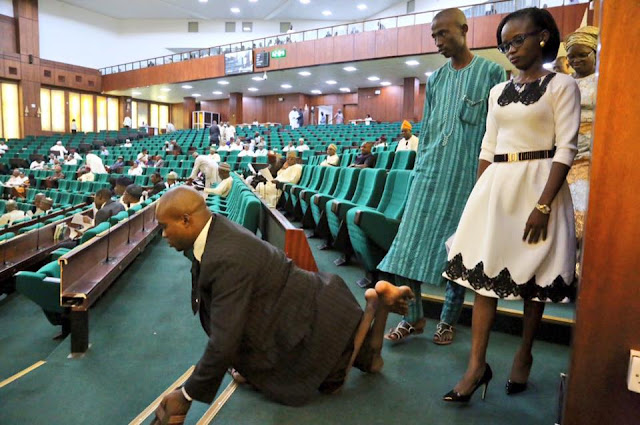 The House of Representatives on Tuesday honoured Mr Abdulsalam Kamaldeen Idowu, a disabled and former homeless street beggar for sponsoring himself through school to become a lawyer and political science graduate and Miss Aarinola Olaiya of Obafemi Awolowo University, Ile-Ife for attaining exceptional record in her academic pursuit.
The decision followed the adoption of a motion sponsored by the House Leader, Rep. Femi Gbajabiamila (Lagos-APC).
The House resolved to establish, by law, a Parliamentary Honours/Award System for recognition of extraordinary achievements by Nigerians.
Gbajabiamila while introducing the Honourees said that the motion was intended to reward excellence and encourage citizens who had elevated the ideals of the Nigerian society.
“When ordinary Nigerians do Extra ordinary things then they must be celebrated and all men and women of power and influence must rise and bow to them”, he said . “Nigerians and the world celebrate Messi and Ronaldo everyday for the amazing things they are able to do with their legs and today we must celebrate Abdulsalam for the amazing things he has been able to do without his legs”, the House Leader added.

According to him, Abdulsalam Idowu displayed resilience and hard work by studying political science and law from street begging and despite being homeless for years sleeping at Idumota Motor Park in Lagos.
“Idowu lost his two legs to polio at the age of three, lost his mother at the age of four, started primary school at eight and resorted to street begging to raise money to buy uniforms, books and to feed. “He begged for arms from primary through secondary school and was known on the streets of Lagos as a beggar.
“From street begging he bought GCE form in 2002, sat and passed the GCE and Joint Admission and Matriculation Board (JAMB) exam and was subsequently admitted to study political science at the University of Lagos. “As he was preparing to complete his first degree, he sat for the West African School Certificate Examination and JAMB.

“In his determination to become a lawyer, passed the exams studied law and was later admitted to Nigerian Law School in 2015 and was called to the Nigerian Bar on Nov. 30 2016,’’ Gbajabiamila said.
Gbajabiamila informed his colleagues that Master Ayodele Dada of Adisa Bashua Street, Surulere 1, federal constituency, Lagos who was similarly introduced to the House and the world in same manner on the 26th of March, 2016, for breaking the 5.0 Cumulative Grade Point at graduation in the University of Lagos just concluded his service at the Central Bank of Nigeria and preparing to further his studies abroad after receiving several job offers and do believe that Aarinola and Abdulsalam will soar higher as well.