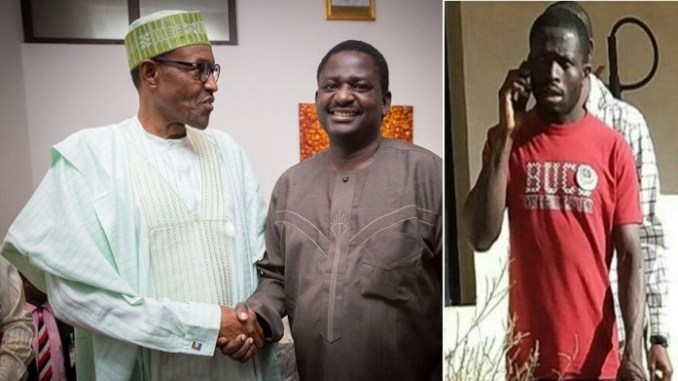 A Nigerian man identified as Christian Efe Oyovweyho has been convicted and sentenced to 8 years imprisonment by Justice Z.B. Abubakar of the Federal High Court Kano for impersonating the Special Adviser to the President on Media and Publicity, Femi Adesina.
He attempted to fleece a Bayero University don of N300, 000 for a nonexistent appointment in the Presidency has been convicted.
The convict was prosecuted by the Economic and Financial Crimes Commission, EFCC, on a 2-count charge that borders on conspiracy and attempt to obtain, in contravention of sections 8(a) and (b) of the Advance Fee Fraud and Other Fraud Related Offences Act, 2006.
The convict’s journey to prison started when the Commission received a petition that he had impersonated Adesina.
The petitioner, Professor Dalhatu Mohammed Galadanci of the Bayero University Kano further stated that the convict had attempted to obtain the sum of N300,000 (Three Hundred Thousand Naira Only) from him.
According to Galadanci, sometime in July 2016, the convict sent him a text message claiming to be Femi Adesina, SA to the president on Media and Publicity.

The defendant fraudulently claimed to be speaking on behalf of the president and that the name of the professor has been forwarded for appointment in the presidency.
The complainant further stated that the defendant claimed to be searching for a better office for him. Subsequently, the defendant asked the professor to make payment of the sum of Three Hundred Thousand Naira Only) in order to facilitate his appointment to one of Nigeria Port Authority, Nigerian Railway Cooperation and Rural Electrification Agency.
At that point, the professor got suspicious and reported the matter to the commission.
Upon arraignment on the 16th of March, 2017, the convict pleaded not guilty and the prosecution counsel, Musa Isah proceeded to trial during which two prosecution witnesses gave evidence while the convict stood as the only defense witness.
In her judgment, Justice Abubakar found the convict guilty of the offence he was charged with after she was convinced that the prosecution had proved the case against him beyond reasonable doubt.
She subsequently sentenced him to 4 years imprisonment without option of fine on each of the two count charge. The sentence is to run concurrently.
Follow Us on Twitter!