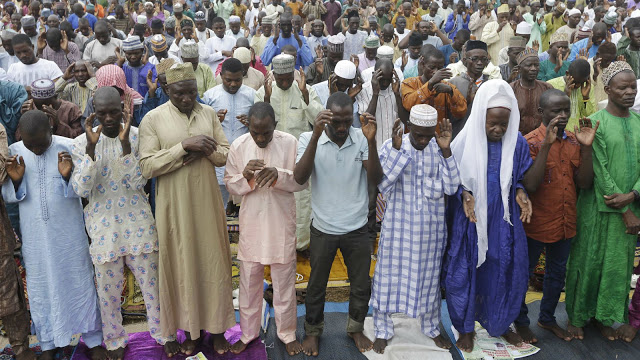 Nigerian Muslims groups have tackled Christians in Nigeria over President Trump's recognition and declaration of Jerusalem as the capital of Israel.
The groups made up of Muslims Awareness International (MAI), Muslims Student Society of Nigeria (MSSN)National Council of Muslims Youth Organizations (NACOMYO) and other met in Ijesha recently carrying placard with inscriptions like ''End Gaza Siege, Free Palestine etc.
In a statement issued and made available to journalists, the Muslims groups  said that 'many so-called educated often mislead the Nigerian Christian Community to believe that the Palestinian struggle is Islam versus Judaism and Christianity''


The statement read in part, “It is rather unfortunate that many so-called educated are misleading the Nigerian Christian community to believe that the Palestinian struggle is Islam versus Judaism and Christianity. This is very wrong and it is sad how some Nigerians politicize the unjust and unilateral American decision to go against international law to recognize the disputed Jerusalem as the capital of Israel. Trump’s singular act drew wide condemnations from world leaders. Religious leaders too, particularly Christian leaders, have also condemned the act.
“The truth is, no matter how religious we might be, we cannot be more Catholic than the Pope. It should interest you to know that Pope Francis has also joined the world in criticizing Trump’s illegal move.  Just yesterday, the leader of the Coptic Orthodox Church of Egypt canceled his proposed scheduled meeting with US Vice President Mike Pence, in protest against Washington’s move to declare Jerusalem as Israel’s capital.
“We call on Nigerian Christians to follow the directions of these men of God to condemn Israel and the US. It is equally important for the churches to educate their members on the situation in Jerusalem, so they won’t be misinformed by politicians. Let us all stand for justice and unanimously demand Trump and Netanyahu to return to the ideal status quo, a two-state solution where both Israel and Palestine will live, side by side, in peace.''
Follow Us on Twitter!