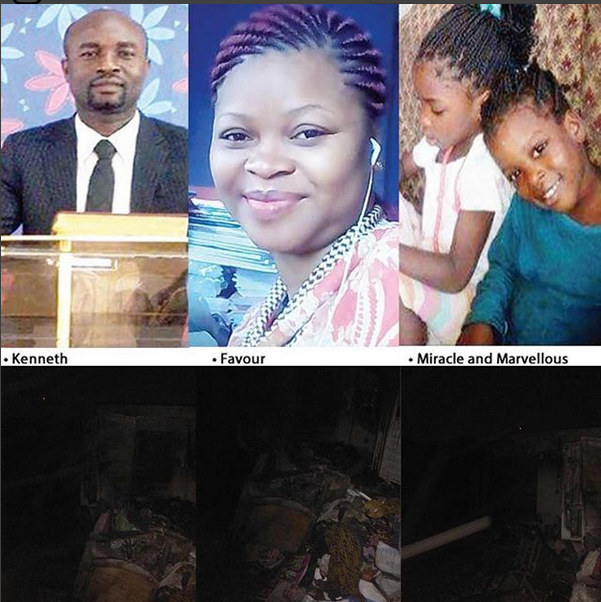 Pastor Kenneth Eze; his wife, Favour; and their two children, Miracle and Marvellous, all died in an early morning fire suspected to have been triggered by a power surge on Wednesday on Buraimoh Street, Bariga, Lagos. According to Punchng, Kenneth was the pastor in charge of World Harvest Ministry, Gbagada. The family of four lived inside a shop where Kenneth and his wife sold drugs and provisions. .
Kenneth reportedly relocated his family to the shop after he could not raise money to pay rent for his former apartment. Ikeja Electric restored power around 2am, which allegedly triggered off the fire in the shop. .The victims were said to have been trapped by the two-level security burglar proof at the entrance of the shop and its extension, leading to their death. .
Officials of the Lagos State Fire Service, Lagos State Emergency Management Agency and policemen from the Bariga division, were said to have responded to the emergency. .

A LASEMA official was alleged to have collapsed during the rescue operation. Two other shops were affected by the inferno before the intervention of firefighters. .The two children, Miracle and Marvellous, were said to be aged six and three respectively.
A friend of the victim, Okechukwu Idoko, said he had discussed with the victim the previous day on the completion of his (Kenneth’s) house in the Ikorodu.“He said he wanted to lay the tiles on the floor, and I advised him to put certain things in place first. That was our last discussion before he died,” he said.
Follow Us on Twitter!