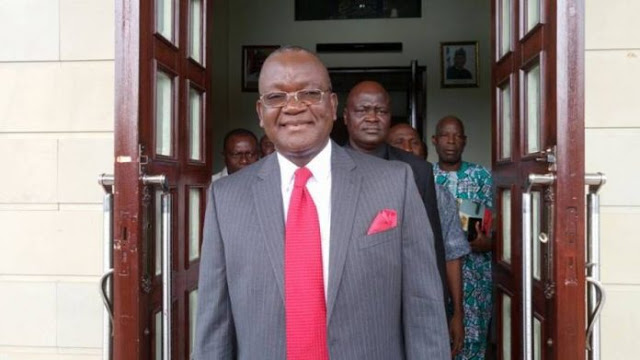 Samuel Ortom, Benue state governor, says President Muhammadu Buhari did not direct state governors to pay salary arrears before Christmas.
Buhari had on November 27 said state governors should ensure payment of salaries backlog from the balance of the outstanding Paris Club refund which would soon be paid to them — to enable workers “smile to banks” during the festive period.
But in an interview, Ortom said Buhari only asked them to use 50 per cent of the refund to pay salaries, not necessarily to clear all arrears.
“The fact is that on that matter, the President is being misquoted. Mr. President didn’t say we should clear arrears of salaries,” Ortom said.

“He said the last tranche of the fifty percent, please get it very well, the last tranche of the Paris Club refunds that was approved by him should be released to states so that civil servants too can enjoy their Christmas like every other person.
“We already have a template of what we agreed with the President and that is that when this money comes that at least a minimum of 50 percent of the amount should be used for the payment of salaries.
“That was the agreement we had. But here in Benue State each time we get it we use more than that.
“The last time we used more than 80 percent for the payment of salaries arrears, even the one that we are about to receive, we will use more than 70 percent to pay arrears. That is what we intend to do.”
Ortom further said Buhari remains the best person to lead the country “at this our very trying time”, adding that he sees no alternative to him ahead of the 2019 presidential election.


“You may have an alternative, but for me, and as far as I am concerned I have not seen an alternative to President Buhari at this our very trying time,” he said.
“It is interesting to note that despite all the challenges he met on ground on assumption of office, a period when the country went into a deep recession, he took far reaching decisions that got us out of the recession; that is no mean achievement.
“I believe that we will get there someday as a nation, challenges may abound but I believe that we will overcome them.
“So I still remain committed to my belief that President Buhari remains the leader that we need at this particular time of our history and development as a nation.
“He is a selfless leader who has instilled discipline in our people. That is the kind of person we need at this particular time of our development and history as a nation.”