This Photo Of Atiku Kneeling Before IBB Got People Talking 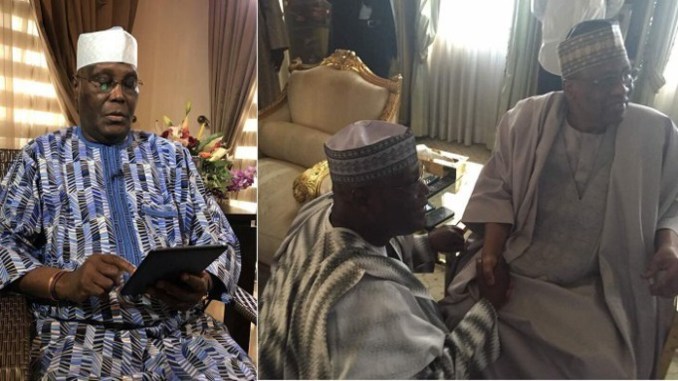 Atiku Abubakar Former vice-president of Nigeria paid a visit to former Head of State Ibrahim Babangida in his home in Minna, Niger State.
Atiku had reportedly gone to seek for Babangida’s endorsement for his candidacy for president in 2019.
According to Premium Times, Babangida “had a very useful political discussion” with the former vice president, his spokesperson Kassim Afegbuan saying:
“They had a very useful political discussion. IBB also has a good relationship with Atiku.”
This Photo Of Atiku Kneeling Before IBB Got People Talking
A photo showing the former vice-president squatting to address Babangida has since circulated on social media.
While some have termed it a show of respect due to a Northern elder, others have described it as a show of desperation to get elected.
See some reactions…
Meanwhile, according to Atiku Secession threats, inter-ethnic discontent and hate speech have plunged present day Nigeria into a division that has probably never been experienced before, former Vice-President Atiku Abubakar has said.

Abubakar who made the observation at the 40th anniversary of the Federal Government College Okigwe, Imo State on Saturday, noted that all tribes of the country needed one another to achieve desired goals.
“This celebration is coming at a critical time in our country’s history,” he said. “All of you must be aware of the recent agitations from different parts of the country, with some groups threatening violence and, in some cases, secession.
These agitations are the result of a number of factors which I will not bother going into at this time, although since you are all enlightened men and women, I have no doubt that you are well and fully aware of what they are.
“As a result of these various forces, the Nigeria of today appears more divided than it has ever been before. Our country is not at war in the sense of guns and bombs, but the level of inter-ethnic discontent, hatred, and hate speech is at an all-time high.”
Recently, Nigeria has been embroiled in secession calls particularly from the Indigenous People of Biafra, IPOB, in the South-eastern part of the country.
This Photo Of Atiku Kneeling Before IBB Got People Talking
Follow Us on Twitter!