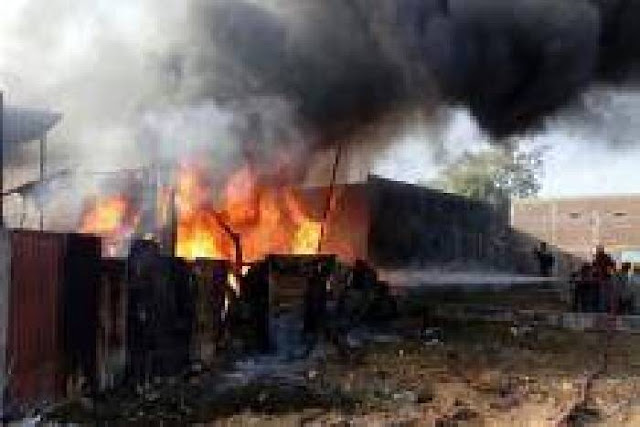 New Market where auto spare parts are sold in Owerri, the Imo State capital has been gutted by fire on Wednesday night.
Acording to reports, fire struck less than 48 hours to the expiration date for the demolition of the market by the state government.
Narrating the incident to newsmen who visited the scene, one of the motor spare parts dealers said he had already removed his wares before the inferno.
In his words: “ I have already removed my goods from the shop, because we have been told by the governor that the market would be demolished on 15 December and even when we pleaded with him to give us more time he refused.

Speaking further, he said, ''those who were affected by the fire were those who had not been able to remove their goods from their shops. But we were surprised about the fire outbreak because nobody could actually say what ignited the fire in the middle of the night “.
Another trader who was not so lucky said he had not finished removing his all his wares in compliance with the state government directives before the fire.
He said: “I only managed to pack out my goods from the first shop because I have two shops. I still had goods at the second shop and I have not finished. When I was informed that fire had burnt a section of the market and my own shop was among.”
Follow Us on Twitter!