Home » opinion » What We Are Doing With Recovered Loot – Osinbajo

What We Are Doing With Recovered Loot – Osinbajo 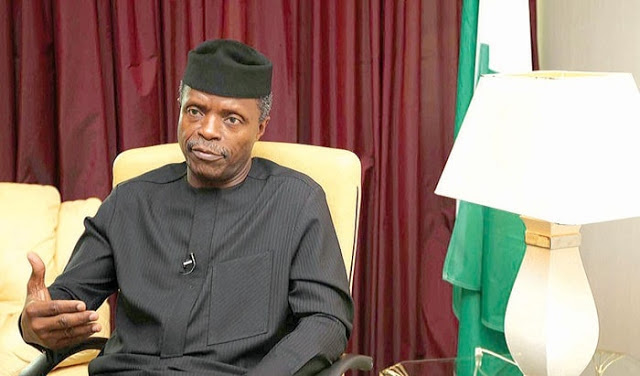 Vice-President Yemi Osinbajo says a large portion of recovered loot is used to fund the social investment projects of the current administration.
Speaking at an event to commemorate the World Anti-corruption Day, Osinbajo listed some of such social investment projects to include the homegrown school feeding programme, growth enterprise and empowerment programme as well as N-Power – “the largest social investment programmes of any administration”.
He promised that the federal government would ensure adequate use of recovered assets.
Osinbajo, who delivered the keynote address titled, ‘Notable trends in the war against corruption,’ was represented by Waziri Adio, executive secretary, Nigeria Extractive Industries Transparency Initiative (NEITI),


“A large portion of recovered assets is used to fund the social investment projects of this administration,” he said.
“In 2016, Nigeria joined the open government partnership (OGP) and has thus far made 14 commitments aimed at ensuring transparency and accountability in the management of public office and increasing citizen participation in governance.
“Some of such commitments include open contracting (via the ICRC’s PPP contract disclosure portal), technology-based citizens’ feedback, presidential committee on asset recovery, voluntary assets and income declaration scheme, and the special investigation panel on the recovery of public property.
“The 2016, 2017 and proposed 2018 budgets all have a line for the recovery of stolen public funds. Hence, the recovery of funds is a revenue line.
While expressing sadness at the difficulty usually experienced in recovering stolen funds kept abroad, Osinbajo said: “The criminality involved in the initial acceptance of stolen funds by institutions in these countries is oftentimes left unpunished”.
“In order to be successful, the war against corruption requires the constant recruitment of stakeholders and partners, particularly from other arms of government and civil society organisations,” he added.
“I hope the issue of stakeholder recruitment and other pertinent issues will form part of your deliberations at the panel discussions still to come.”
Follow Us on Twitter!