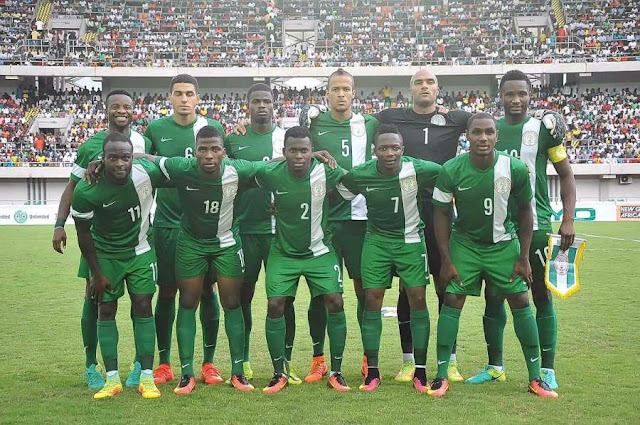 Former Technical Director of the Nigeria Football Federation (NFF), Tunde Disu, says the Super Eagles should be ready to face the real Albiceleste of Argentina at the World Cup.
Disu gave the advice in an interview with the News Agency of Nigeria (NAN) on Saturday in Lagos on the draws made on Friday that pit Nigeria in Group D alongside, Argentina, Croatia, and Iceland.
NAN reports that the World Cup draws held in Russia, Nigeria is in the group alongside Argentina who they had faced four times before in the World Cup in 1994, 2002, 2010 and 2014.
The only time Nigeria avoided Argentina in the World Cup was in 1998 in France. It will, however, be the fifth time Nigeria will be facing the Albiceleste opposition at the grand football fiesta.

According to the draws, Nigeria will play first against Croatia in the first ever senior international match, while the smallest nation ever to qualify for a World Cup, Iceland will play against Nigeria also in Group D.
The Icelanders, the only newcomers, will play two-time winners Argentina in their first World Cup finals match. The Eagles last group match will be against Argentina who has turned their World Cup nemesis.
On Argentina’s opposition, Disu said that though Argentina was becoming a familiar foe, yet Nigeria should not start counting their teeth with their tongues.
“Nigeria should be ready to face the real Argentina opposition, it is true we beat them at the friendlies, but this is a World Cup with a different ball game. “The fact that we beat them would have put some element of revenge in them because they won’t want a repeat of that at the Mundial.
“Argentina are highly technical team with which they would have welcome their talisman, Messi. What will be in their head now is that who tops the group? “Argentina can be beatable, but how ready we are will go a long way in resolving that because we cannot really judge them with the friendly we played against them,’’ he said.
Disu said that the first game at the World Cup would count a lot if the Eagles would progress from the group stage. “We must take our first match seriously, it is the only match that can give us an edge in the campaign. It is quite important.

“Others in the group should be taken seriously too, there is no easy group in a World Cup, and they all merited their place. “Playing against Argentina, we should also avoid a dead-ball situation which can be fatal, the Argentine team is very good at the dead ball situation,’’ he said.
In the vein, Chairman, Sports Writers Association of Nigeria (SWAN) Lagos Chapel, Fred Edoreh, said that there was no easy team in the World Cup. “The thing with football now is that you cannot see a group now and say it is an easy group. Argentina we know, but the East European teams can also be dangerous.

“European teams play some very strong tactical football they have a lot of stamina and they can be crafty. “It does not matter who is in the group now, our determination and inspiration will go a long way to see us through the group stage.
The players need determination and maturity. “Also, it also depends on the plans of the football house if they are serious about this campaign and how they will get the players ready,’’ he said. NAN also reports that in 1994, Nigeria was pitted against Argentina, Bulgaria, and Greece.
The opening match was against Bulgaria which the Super Eagles won 3-0 with late Rashidi Yekini scoring the country’s first ever World Cup goal. They topped the group in spite of losing 1-0 to Argentina because they also beat Greece 2-0 to garner six points.
In 1998, they were drawn again against Bulgaria, Spain and Paraguay, winning two matches, 3-2 against Spain, 1-0 against Bulgaria and lost 1-3 to Paraguay. They, however, lost woefully in the round of 16, 1-4 to Paraguay. In 2002, the Eagles were for the second time drawn against Argentina who beat them 1-0, they lost to Sweden 1-2 and drew 0-0 against England.
They failed to go beyond the group stage like it happened in 2010 in South Africa where they got their third pairing with Argentina alongside South Korean and Greece. They lost 0-1 to Argentina, 1-2 to Greece and drew 2-2 with South Korea. The experience in the 2014 edition in Brazil was like 1994 and 1998 where they were able to get out of the group but failed to go beyond the round of 16.
That year they were drawn again against Argentina, the fourth time in the World Cup, Bosnia Herzegovina and Iran. They lost 2-3 to Argentina, drew 0-0 with Iran and beat Bosnia Herzegovina 1-0 to move into the round of 16. Following the protest on match bonuses, the team lost concentration in the round of 16 and lost to France 0-2. (NAN)
Follow Us on Twitter!